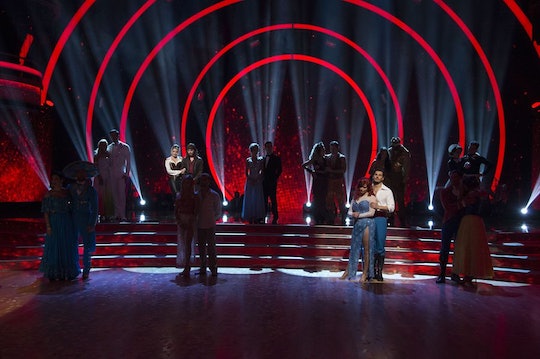 'DWTS' Introduced A Major Switch Up On Monday

Usually on Dancing with the Stars, all the wannabe ballroom dancers perform their routines, and then at the last possible moment it is revealed who is in jeopardy and then who is going home. Not on Monday night, however. Why did the elimination process change on DWTS? Fans are confused. And so am I to be perfectly honest. Of course, there were some problems with the original set up, namely that it's hard to build up tension when you reveal the outcome 30 seconds later. Nevertheless, it was an odd switch-up.

The theme Monday night on Dancing with the Stars was Movie Night, which I am going to petition to be a regular theme because it is so much fun. Each of the contestants performed a routine based on a movie genre, be that foreign, animated, Western or otherwise. To make this night even more surreal, Shania Twain acted as a guest judge. I'm all for Shania Twain, but wouldn't she be better suited to a music-themed night? In any case, it was a really fun show, only a little off-putting when it was revealed right at the beginning who was going to be safe and who was in jeopardy, but not all at the same time.

Perhaps the weirdest part about this set up was that it was bizarrely inconsistent. Nikki Bella and her partner Artem Chmerkovskiy performed first, a sexy Argentine Tango to the French song "Demière Danse." Immediately after they performed, which the judges adored, Tom Bergeron informed the couple that he could now let them know that they were safe until next week. This led me to believe that Bergeron was going to let each couple know their status after their routines. A bit of a change up, but definitely logical. However no, that's not how it went.

Before the second couple of the night, Drew Scott and Emma Slater, performed their action-packed Paso Doble, DWTS decided to give audiences the whole jeopardy vs. safe set up. On the stage were Scott, Frankie Muniz, Nick Lachey, Terrell Owens, and Victoria Arlen. This was the stage that usually appears at the end of the show, with Bergeron's voice, as usual, addressing each couple on stage by name and announcing whether they were safe or in jeopardy. Muniz and Scott were safe, while the other three were in danger of going home. Again, I have no problem with the show changing the elimination process, it just seems like a really odd way to go about it, and fans seem to agree.

The show also left the fates of Jordan Fisher, Vanessa Lachey, and Lindsey Sterling up in the air for half of the show. Were we just supposed to assume that they were safe since three couples were already up on the chopping block? Were we supposed to worry about them as well? Also, it unquestionably has to be additionally difficult on the performers to do their best and dance with confidence when they know that it might be their last performance on the show ever. Don't these people already go through enough? If the show does want to change things, I would personally suggest that telling dancers right after they've performed their routine seems kinder and way less confusing.

Of course, the biggest shock of the reveals wasn't their timing, it was that fan-favorite Arlen was in danger of being sent home, while Scott was safe. Look, I'm not going to mince words here. Scott seems nice and all, but Arlen is doing all of this without feeling in her legs. That really cannot be emphasized enough. Plus, she's doing an incredible job! If anyone deserves to make it to the end, it is that woman.

So who knows if this mixed up elimination situation will stay. I kind of hope it doesn't.