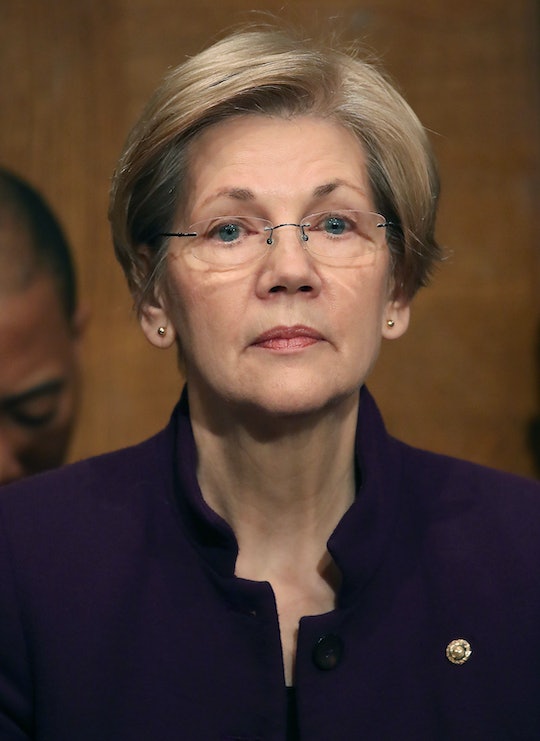 Why Did The Senate Silence Elizabeth Warren?

It's been a contentious week in the United States Senate. On Monday, Democratic senators hosted an all-night session to rally against Tuesday's confirmation vote for Education Secretary Betsy DeVos (it passed after Vice President Mike Pence broke a 50-50 tie in her favor), and during a Tuesday evening hearing ahead of Wednesday's confirmation vote for attorney general nominee Alabama Sen. Jeff Sessions, Republican senators voted to formally silence Massachusetts Sen. Elizabeth Warren as she spoke out against Sessions and his record on civil rights issues. Why did the Senate silence Elizabeth Warren? Senate Majority Leader Mitch McConnell argued that she "impugned the motives and conduct" of Sessions, which is prohibited according to Senate rules.

According to The New York Times, Warren had been delivering a speech on the Senate floor, arguing that her fellow senators should vote against Sessions' confirmation. She began her speech by discussing President Trump's controversial immigration order meant to temporarily block refugees and immigrants from entering the country, and argued, according to C-Span, that Americans "need an attorney general who can be relied on to enforce the laws fairly." Warren then alleged that, based on Sessions' reported reputation as someone who is a "particularly vitriolic opponent of commonsense immigration policies," Americans couldn't expect him "to stand up to the President's campaign of bigotry."

That may have been a pretty sharp rebuke, but Warren's comments on Sessions' immigration views weren't ultimately what the GOP objected to. Nor was it her later comments about the fact that he reportedly made "derogatory and racist comments" while serving as Alabama Attorney General, or her claim that he "occupies a place way out at the radical fringe of his party, regularly taking positions that are far more extreme" than other GOP senators.

What actually got her in trouble, according to The New York Times, was the fact that she later tried to read a 1986 letter about Sessions by the late Coretta Scott King, which King had originally written to object against what had then been Sessions' federal judicial nomination. The nomination, which would have given him a lifetime appointment as a federal judge, ultimately failed, making Sessions "only the second nominee in 50 years to be denied by the Senate for a federal judgeship," according to The Washington Post.

Warren began reading the letter, in which King accused Sessions of using “the awesome power of his office to chill the pre-exercise of the vote by black citizens,” according to CNN, a claim which McConnell then argued violated Rule XIX, which prohibits senators from “directly or indirectly, by any form of words impute to another senator or to other senators any conduct or motive unworthy or unbecoming a senator," according to The Guardian. A Senate vote upheld McConnell's objection, and Warren was asked to take her seat, forbidden from participating further in the floor debate, according to CNN.

The move riled not only Senate Democrats, but also many American voters, who took to social media alleging that the GOP had unfairly silenced not only Warren, but King as well. #LetLizSpeak quickly became a trending hashtag on Twitter, according to USA Today, and messages condemning the Senate's vote poured in. In a statement, Louisiana Rep. Cedric Redmond argued that the GOP's vote was an attempt to "silence Coretta Scott King from the grave," and said,

Mrs. King's characterization of then U.S. Attorney Senator Sessions was accurate in 1986 and it is accurate now. He is as much of a friend to the Black community and civil rights as Bull Connor and the other Good Old Boys were during the Civil Rights Movement.

New York Sen. Chuck Schumer also objected to the ruling, arguing that it as "selective enforcement" of a rule that could be used "almost every day on the floor of the Senate" but one which senators are rarely punished for, according to BBC News.

Though Warren was formally silenced by the Senate, she continued to communicate her message, and read King's letter in a Facebook Live video Tuesday night, filmed right outside the Senate doors, according to The Guardian. She also hit back against the Senate ruling in a series of tweets, where she wrote she would "not be silent," and that she would continue to stand up for "millions [of Americans] who are afraid and appalled by what's happening in our country."

In an call-in interview Tuesday night with MSNBC's Rachel Maddow, Warren said she'd been "red-carded on Sen. Sessions," and that she was "out of the game" in the Senate, according to CNN. She also urged Americans to pay attention to King's words, according to NBC News, and said,

I hope everyone reads the letter. It is eloquent, and it reminds us of a time in history that we would like to think is far behind us but reminds us that it is not.

According to Politico, McConnell later explained his actions by saying that “Senator Warren was giving a lengthy speech," and that she "had appeared to violate the rule." McConnell then added that, "she was warned. She was given an explanation. Nevertheless, she persisted.”

Despite Warren's absence, Senate Democrats continued to hold the floor in protest of Sessions' nomination. But even with the strong opposition, it's expected that Republicans will move to officially confirm him as attorney general during the scheduled vote Wednesday afternoon.