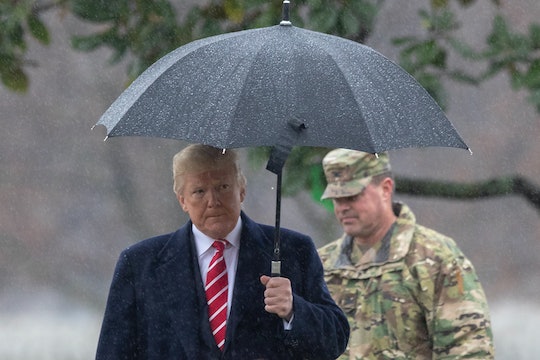 Why Did The Trump Foundation Shut Down? The Family's Charity Is No More

It's been one heck of a month for Trump. From his "smocking' gun tweet and potential government shutdown to Michael Cohen's sentencing and his controversial choice for acting attorney general, now there's another big item on the table. Trump is shutting down an entity that's been the source of much controversy – the Trump Foundation. And now people want to know, why did the Trump foundation shut down? The family's charity is no more.

This week, Trump agreed to dissolve the Trump Foundation after an investigation and a lawsuit filed by New York's acting Attorney General Barbara Underwood, according to CNN.

The suit alleged "persistent illegal conduct." The Foundation allegedly used the charity's fund to pay legal fees, furnish one of his clubs, make a political donation, according to the Washington Post.

“Our petition detailed a shocking pattern of illegality involving the Trump Foundation — including unlawful coordination with the Trump presidential campaign, repeated and willful self-dealing, and much more,” Underwood said in a statement, as reported by the Daily Beast.

“This amounted to the Trump Foundation functioning as little more than a checkbook to serve Mr. Trump’s business and political interests,” she said.

Along with the agreement to dissolve, Trump must distribute the Foundation's remaining funds to approved charitable organizations, which the court will oversee, according to CNN. It will also allow the state's attorney general's office to look through the Trump Foundations tax returns, as well a list of recipients of the charity's assets.

The lawsuit, which Business Insider reported the incoming attorney general, Letitia James, will continue, also looks to ban Trump from being on the board of any charitable organization for 10 years, and his children Don Jr., Eric, and Ivanka for one year.

Trump continues to deny the allegations. In fact, he wanted to shut down the charity in 2016, but the New York attorney general denied his request because the charity was at the center of an investigation, according to the Washington Post.

He created the Trump Foundation in 1987 with money made from his best-selling book, The Art of the Deal, according to BBC News.

Trump took to Twitter to respond to the decision, saying: "The Trump Foundation has done great work and given away lots of money, both mine and others, to great charities over the years — with me taking NO fees, rent, salaries etc."

This is only one of many legal troubles Trump faces, according to NPR.

And the Mueller investigation is still going strong, according to Fortune.

His inauguration committee is also under investigation, according to The Hill.

So, the action to dissolve the foundation may be the first of many outcomes for Trump. And, whatever the case may be, Trump does not appear to be happy about recent events. Depending on the outcome of this particular lawsuit, as well as other investigations, 2019 could be a long year, as well.