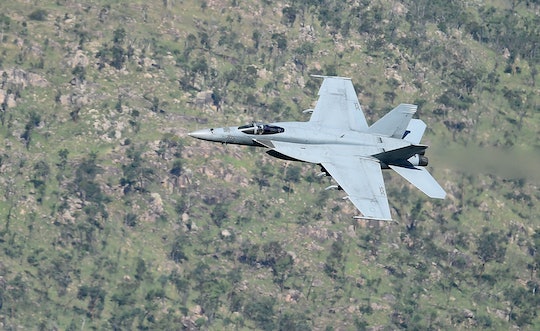 Why Did The U.S. Shoot Down A Syrian Jet?

On Sunday, the U.S. military confirmed that a U.S. Navy fighter downed a Syrian jet over Ja'Din, Syria. The move prompted a strong response by Russia, whose Defense Ministry condemned the action. Why did the United States shoot down a Syrian jet? In a nutshell, it comes down to the Syrian civil war and ISIS forces on the ground in Syria, but the situation is made even more complex by Russia's involvement in the Syrian conflict.

Territorial groups, military alliances, and outside involvement and interference have muddied the entire Syrian conflict. In a nutshell, here's what you need to know about the Syrian civil war. First, how Syria got here: Since 2011, thousands of Syrians have rebelled and died fighting against President Bashar al-Assad's dictatorial regime as "Arab Spring" rebellions overtook much of the Arab world, some more successful than others. The instability within the region has enabled the terrorist group ISIS to take hold in parts of Syria, giving Assad two fronts to fight: First, his own people and now ISIS. The United States has supported the Syrian rebels fighting Assad, while Russia has supported Assad's regime, but of course, it gets a lot messier than that.

Russian President Vladimir Putin has said that Russian forces are merely supporting Assad's fight against ISIS, but there always seem to be a whole lot of dead Syrian rebels and innocent Syrian civilians afterward anytime Russia "helps" out. Oh, and then Syria used chemical weapons on its own people, as recently as April. It's understandable then why millions of refugees have fled the country, causing one of the largest refugee crises since World War II.

A few more key terms: Pro-Syrian forces are Assad's troops militarily supporting his regime. The Syrian Democratic Forces, also known as SDF, is the name of the collective Syrian-led rebellion against Assad. In 2014, the United States officially joined the fight against ISIS in the Middle East with Operation Inherent Resolve, whose strategic mission includes quashing ISIS in Syria.

This complicated and devastating history of the last six years in Syria brings us to Sunday, when a U.S. F/A-18E Super Hornet fighter aircraft shot down a Syrian SU-22 jet. According to a statement from the Combined Joint Task Force of the U.S. military, a Syrian SU-22 jet bombed SDF forces held up in the city of Ja'Din. Immediately upon bombing the rebel forces, the U.S. Navy shot down the Syrian jet. The Combined Joint Task Force statement asserts the act was "in accordance with rules of engagement and in collective self-defense of Coalition partnered forces" — those Coalition partnered forces being the SDF. In addition, the Operation Inherent Resolve also included this strong message of justification for Sunday's action:

The Coalition presence in Syria addresses the imminent threat ISIS in Syria poses globally. The demonstrated hostile intent and actions of pro-regime forces toward Coalition and partner forces in Syria conducting legitimate counter-ISIS operations will not be tolerated.

Translation: Do not mess with the United States' allies in Syria.

Unfortunately, this has created a whole new uglier and messier situation. Remember how Russia backs a Syrian pro-Assad regime? Yeah, they're not so thrilled about how the United States just shot down a pro-Assad jet. In a statement from the Russian Defense Ministry, Russian air defense will consider "All flying objects, including planes and drones of the international coalition, detected west of the Euphrates [River]" as targets. So, what does this mean exactly?

Russia will shoot down any U.S. aircraft that crosses into Syrian airspace west of the Euphrates River. Is the United States at war with Russia or Syria? Technically no — but it's sure starting to feel like America might be headed into serious and substantial conflict in Syria sooner rather than later. And with a commander-in-chief who can barely keep his administration running, this is really the last thing America needs right now.