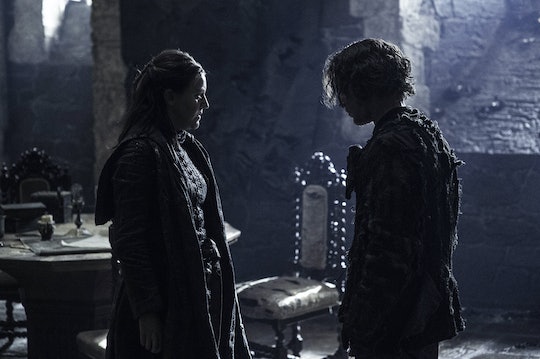 Why Did Theon Jump Into The Water On Game Of Thrones?

An ocean battle between the Greyjoys raged in Game of Thrones Season 7 Episode 2, while Yara and Theon were transporting Ellaria and the Sand Snakes. It was a nasty and bloody battle that ended more than a few lives, but perhaps the most tense moment came when Euron captured Yara. With a blade to her throat, he tried to goad Theon into rescuing her, but instead of doing so, Theon quite literally jumped ship. But why did Theon jump into the water on Game of Thrones?

It looked like Theon just panicked. The fight that was raging around them was violent even by Game of Thrones standards, with Euron's men cutting appendages from fallen soldiers (presumably as trophies) and fires breaking out all over the place. There was also the immense pressure of getting to Yara when Euron could have ended her life at any second, right before Theon's eyes. It hasn't been terribly long since Theon was Ramsay's prisoner and the trauma of that is still living with him every day; being thrown into such chaos seemed to trigger that for Theon, and he froze. Then he dropped and rolled, removing himself from the situation entirely. Not a great decision, to be sure, but definitely an understandable one.

It may have been disappointing to watch Theon lose it at the worst possible time, but it's important to remember that his recovery is ongoing and there's a lot he's never really dealt with. Just because he's no longer under Ramsay's control doesn't mean that he's completely fine and can function as he did in the years before Ramsay's torture. It would have been more satisfying to see Theon have a hero moment where he came to his sister's aid and defeated Euron, but it wouldn't have made as much sense for his character.

Now Theon is in an interesting position. He may have been the only person to survive Euron's attack thanks to his decision to go full Titanic, which means he could be the one to try and undo the damage. If he gets to shore in time (hopefully he swims faster than Gendry rows) then maybe he could rally the remaining forces to go after Euron — if any of their forces remain unburned, that is.

Theon majorly missed his moment to be the hero and protect Yara, but his chance to make things right may still come. Hopefully when the occasion arises, he won't choke a second time.