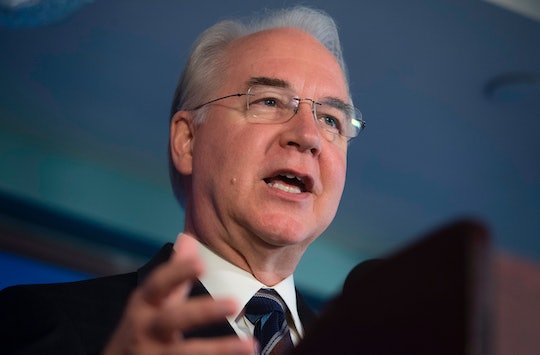 On Friday afternoon, Tom Price, Secretary of Health and Human Services, announced that he was resigning from his position in the Trump administration. If "Another One Bites The Dust" by Queen is playing in your head right now, you're not the only one. But why did Price resign from his position? Price had been under a lot of scrutiny during the past week and it all can be traced back to trips taken on a private jet. Yes, a private jet that cost tax payers a lot of money.

For those who have been following the news at all this week, this doesn't come as a surprise. But in order to understand Price's resignation, there are a few key things you need to know. Earlier in the week, Politico reported that Price had been taking government funded private jets for his own personal travels throughout the United States and took military aircraft for trips overseas. During his domestic trips, Price made "official government trips" but not without spending time with friends and family members. This came with a cost.

According to the statement from White House Press Secretary Sarah Huckabee Sanders, Price offered his resignation earlier on Friday, which Trump accepted. Trump had not been happy with Price's decision to use the private jets, at all. "I certainly don't like the optics," Trump told reporters, according to USA Today, on Wednesday. "I'm not happy. I can tell you that. I'm not happy."

The outrage is, of course, that these private jets are funded by tax payers. Therefore, you and I were paying for Price to visit his son with his wife and give a speech. While some people might not have a problem with the ladder, the former is definitely a cause for concern. Price's domestic trips allegedly cost an estimated $400,000, according to Politico and his use of military jets made a combined total of $1 million, according to ABC News. It is normal protocol for the secretary of Health and Human Services to fly commercial, when it is available, according to Politico. And Price definitely did not fly doestic.

I regret the concerns this has raised regarding the use of taxpayer dollars. All of my political career, I've fought for the taxpayers. It is clear to me in this case, I was not sensitive enough to my concern for the taxpayer. I know as well as anyone that the American people want to know their hard earned dollars are being spent wisely by government officials.

Just like Trump, certain people in Congress weren't happy with Price's behavior and called for his resignation before Price made it official. A group of five Democratic members of Congress called for Price's resignation on Wednesday in a public letter written to the secretary, according to Business Insider. "In light of your breach of the public trust, we write to urge you to do the right thing and immediately tender your resignation," the members wrote.

Just a few short days later, Price listened. In his official resignation letter, released by the White House on Friday, Price claimed that he would resign so Trump and his administration could "move forward without further disruption."