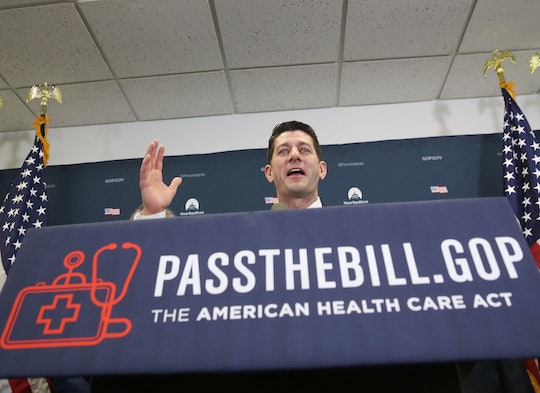 After much debate on a heath care plan that nobody seemed to like, the House vote was canceled on Friday afternoon. So why did Trump kill the AHCA? Reportedly, he didn't have the votes to pass it, according to ABC News. Voting was originally set to take place on Thursday, but was postponed after it became clear that the bill wouldn't pass. Trump issued an ultimatum in response, saying that if a vote didn't occur on Friday, he would abandon the plan. Late-night changes were made in an effort to appeal to more conservative Republicans, but apparently they weren't enough to sway critics.

Friday morning and afternoon saw lawmakers scrambling to get the bill passed. ABC reported that the House voted to move the bill to the floor at 11:00 a.m., and House Speaker Paul Ryan met with Trump at the White House just past noon. An hour later, Vice President Mike Pence met with the House Freedom Caucus, a conservative group that opposed the bill, but apparently no compromise was struck. Around 3:30 p.m., Trump called The Washington Post to announce that the bill had been scrapped. Reporter Robert Costa tweeted that Trump told him, "We just pulled it."

Canceling the AHCA vote means that the Affordable Care Act, also known as Obamacare, will not be repealed, as Trump has insisted for nearly six years. Trump's passionate hatred for his predecessor's signature plan, and his intent to squash it, was one of the top selling points of his campaign. Another was his purported skill at negotiation, which also took a hit on Friday (although it wasn't the first time). Trump's boasts about his book, The Art of the Deal, are countered by Tony Schwartz, the man listed as Trump's coauthor. Schwartz claims that he wrote the entire book, and Trump's dealmaking skill is a myth that he helped create. The author told the New Yorker that if he were to write the book today, he'd title it The Sociopath.

In a news conference on Friday afternoon, Ryan blamed the bill's failure on "growing pains" and claims that Republicans "came really close" to passing it. He also took the blame for giving up on the health care plan, saying that he advised the president to do so. Following Ryan's conference, Trump spoke live on CNN. He blamed Democrats for the bill's failure, and said that he'll wait for Obamacare to "explode," after which he expects Democrats will come to Republicans for help. Next up on his agenda, he said, is tax reform.