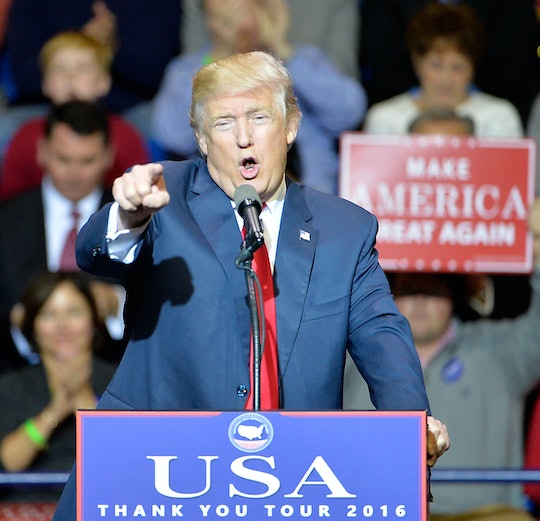 Why Did Trump Win 'TIME's Person Of The Year Award? It's About Influence

Agree or disagree – or perhaps agree to disagree, President-elect Donald Trump has been named TIME magazine's 2016 Person of the Year. It's a decision that has appeared to evoke a lot of differing emotions from people across the country. It's been an intense election cycle, to say the least. And with Hillary Clinton's historic lead of 2.7 million in popular votes, the weeks leading up to Trump's inauguration continue to reveal the impassioned divide between his supporters and critics. Trump's election victory has undoubtedly sparked fears from many concerned about what his presidency will bring. So why did Trump win TIME's Person of the Year Award?

The mixed reactions show Trump's award was controversial. But for TIME magazine, apparently the decision was all based on who "had the greatest influence, for better or worse." And as TIME's Michael Scherer wrote, throughout his campaign, Trump did what "no American politician had attempted in a generation":

For nearly 17 months on the campaign trail, Trump did what no American politician had attempted in a generation, with defiant flair. Instead of painting a bright vision for a unified future, he magnified the divisions of the present, inspiring new levels of anger and fear within his country. Whatever you think of the man, this much is undeniable: he uncovered an opportunity others didn’t believe existed, the last, greatest deal for a 21st century salesman. The national press, the late-night comics, the elected leaders, the donors, the corporate chiefs and a sitting President who prematurely dropped his mic—they all believed he was just taking the country for a ride.

Those who publicly criticized TIME's award on social media argued that the Person of the Year title "normalized" Trump, whose campaign has emboldened white supremacists and anti-Muslim and anti-immigrant rhetoric, among other things.

But in TIME's explanation for the decision process in naming a Person of the Year, the publication pointed to former Managing Editor Walter Isaacson's reasoning in 1998, in which he explained that the title goes to: “the person or persons who most affected the news and our lives, for good or ill, and embodied what was important about the year, for better or for worse..." The publication cited its past Person of the Year awardees, Adolf Hitler and Stalin, to bring home the point.

In an interview with TODAY's Matt Lauer, Trump said, "...to be on the cover of TIME as Person of the Year is a tremendous honor." Clinton, and Beyoncé were on the publication's short list.