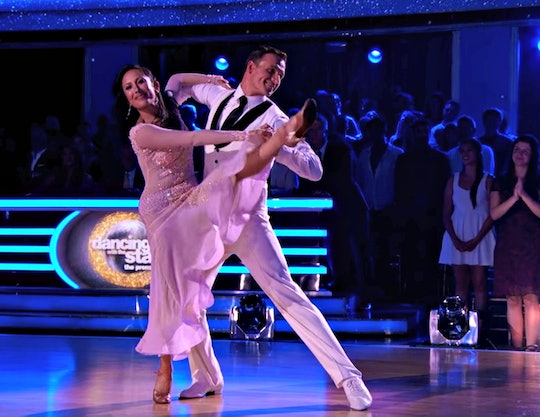 Why Did Two Protestors Interrupt Ryan Lochte's 'Dancing With The Stars' Performance?

Though 13 celebrities made their dancing debuts last night, it was two protestors who stole the spotlight. Dancing with the Stars kicked off a 23rd season last night featuring an athlete who is perhaps the show's most controversial star yet: Olympic swimmer Ryan Lochte. Though Lochte agreed to a spot on the show in part to recover from bad publicity following the Rio Olympics, he didn't get an entirely fresh start — and on Monday night two men made sure to remind him that not everyone was pleased with his appearance there. But why did the two protestors interrupt Ryan Lochte's Dancing with the Stars performance? Their motive is unclear, but they weren't alone.

Update: Officer Drake Madison of the Los Angeles Police Department responded to a request for comment: "We can confirm that Barzeen Soroudi and Sam Sotodeh were placed under private person's arrest for trespassing and there is no further comment at this time."

A spokesperson from BBC Worldwide productions also reached out to Romper, stating: "Two individuals stormed the dance floor tonight and were immediately subdued and escorted out of the building. The matter is now being handled by the authorities."

After Lochte and partner Cheryl Burke finished their foxtrot, they stood with host Tom Bergeron to get the judges' reactions. As judge Carrie Ann Inaba commented on their performance, she interrupted herself to call out, "Excuse me," CNN reported. Though the camera remained on her, at-home viewers heard noise from the audience as Inaba said, "Off! Off!" A shot of Lochte and Burke looking concerned preceded commercials. Bergeron acknowledged what happened on Dancing With The Stars after the break, according to The New York Times. "We had to go to break because we had a little incident," he said. "I would like to personally thank our security team for staying in shape." He also checked in with Lochte, who said that he felt "a little hurt." Representatives for BBC Worldwide Productions, Lochte, and the Los Angeles Police Department did not immediately respond to requests for comment.

Good Morning America released exclusive video of the Dancing with the Stars interruption Tuesday morning, revealing that two men went onstage wearing white T-shirts featuring Lochte's name crossed out. In the footage, one member of the security team appears to tackle one of the protestors to the floor. Another person from the security detail escorts the other protestor away from the judges' desk. NBC News identified the men as Sam Sododeh and Barzeen Soroudi, two "authorized" members of the Dancing with the Stars audience who only donned the anti-Lochte gear after gaining admission to the show. The protestors seemed to have backup as well: CNN reported that a minimum of four additional individuals yelled anti-Lochte sentiments, and The New York Times reported that multiple people in the audience wore shirts like the ones worn by the onstage protestors. Four to five women who chanted "liar" were escorted from the studio, according to NBC News.

Lochte told CNN that the protest was disheartening: "You know, at that moment, I was really heartbroken. My heart just sunk. It felt like somebody just ripped it apart." Gold medalist Lochte was charged by Brazilian authorities in August, according to CNN; Lochte was accused of falsely reporting a crime after he claimed that four Olympic athletes, himself included, were victims of an armed robbery. On the Dancing with the Stars season premiere, Lochte said, "My biggest regret is letting other people down, and now I want to prove to the world that I've changed."

This is my home and I was just so shocked that people would come here and be so negative. This is a safe place for people to learn a new skill and seek redemption or start a new chapter in their life and that's what Ryan is trying to do and I just felt so defensive that someone would try and ruin that for him and for everyone watching, so I took it upon myself to make sure they were escorted out. I wanted to protect my home.

Judge Inaba posted a photo to Instagram after the show which appears to include her posing with a member of the Dancing with the Stars security team. She wrote:

We had a bit of a scary moment during tonight's live taping of @dancingabc, but thanks to our security team and incredible staff at #DWTS, no one got hurt. Only positive energy here tonight and always. Thank you.

During the Dancing with the Stars premiere, Lochte and Burke danced to Michael Bublé's version of "Call Me Irresponsible." Video of the performance is available on YouTube:

Though Lochte's first night of Dancing with the Stars may not have gone as planned, he has plenty of time to recover. Lochte and Burke walked away with 24 points, according to ABC, tying Amber Rose and Maksim Chmerkovskiy — evidence that they definitely have a shot at the Mirror Ball Trophy.