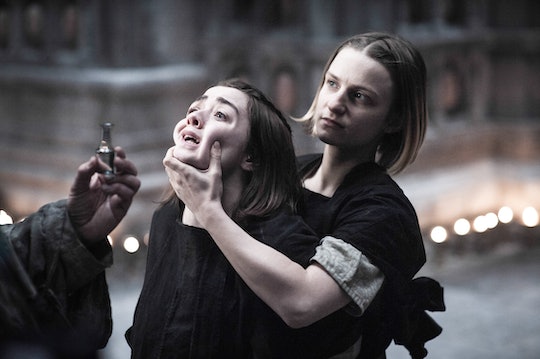 Why Did Waif Stab Arya On 'Game Of Thrones'? A Girl Had To Die

Just when we thought Arya was about to do away with the whole Faceless Man story line on Game of Thrones, even going so far as to get back Needle, she had to go and get herself attacked by Waif. As we know from Episode 6, Jaqen H'ghar said that a girl must die, meaning Arya, and Waif was more than happy to set out and get it done. So if you're wondering, "Why did Waif stab Arya?", you're probably not alone. No one can really imagine homegirl dead at this point, and Waif's motives seem to be about more than following Jaqen's orders.

From the beginning, the other student under Jaqen has seemed to have it in for Arya, constantly weary of her and always insisting that she was not meant to be in the House of Black and White. And we really can't blame her, since we all know Arya doesn't belong in some organization of trained assassins when she's Arya freaking Stark, one of the most important characters on Game of Thrones and in Westeros in general. She did not escape King's Landing and become such a badass to live out her days in Braavos.

Obviously Waif saw this from the beginning though, so as soon as she was able to catch Arya being Arya instead of "no one," she had to run and tell Jaqen, who she also reminds she was promised this chance to kill Arya. Which also kind of goes against their code though, since you aren't supposed to kill for personal revenge and definitely not supposed to refer to yourself as "I" or "me," but we'll chalk this up to show errors and move on.

Once Waif lets Jaqen know that Arya has failed, he tells Waif, "Don't let her suffer," and the smug girl leaves, ready to plot just how she'll do away with Arya Stark. Unfortunately, when Waif stabs Arya multiple times, it is not without suffering that she does it, and right after Arya resolved to leave for Westeros, no less.

So, why did Waif stab Arya? Could she have killed (or tried to kill) her another, less painful way? Of course. But since Waif has been dying - no pun intended - to get rid of Arya since pretty much day one, she likely stabbed her because she was jealous with the amount of time and attention she was getting from Jaqen. It's no secret that the Faceless Man seemed to have taken a liking to Arya and was adamant in helping her become one of them, and therefore Waif wasn't happy and saw competition.

Arya is nothing if not an excellent fighter and survivor. Pair that with the identity of a Faceless Man and you've got a pretty amazing assassin. Waif would be crazy not to be jealous, but then again, isn't that sort of emotion one that Faceless Men are supposed to do away with?

We refuse to believe that Arya is dead, so let's just not go there, like ever. But it's safe to say that if she is still alive after Waif stabbed her, she'd better get patched up and on that ship to Westeros before anyone else sees her limping through Braavos.