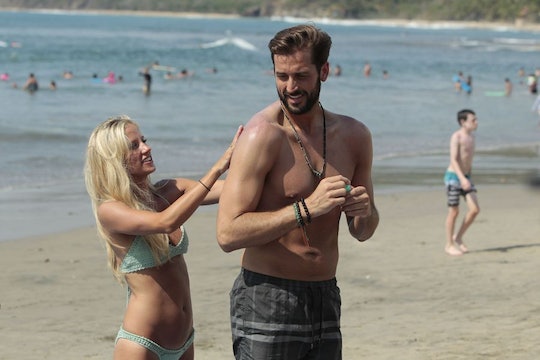 Why Didn’t Brett Give Anyone A Rose On 'Bachelor In Paradise'? He Sent Himself Home

On the verge of couple's week, Bachelor in Paradise had one final rose ceremony to finalize the pairs that would go into fantasy suites. After promising Lauren his rose, Brett wound up bailing before giving his out. So why didn't Brett give anyone a rose on Bachelor in Paradise? He broke two hearts in the process.

Going into this rose ceremony, both Izzy and Lauren had their hearts set on Brett's rose. Izzy had even given up her super steady thing with Vinny because she felt an apparently very convincing stomach flip when Brett came down the stairs and wanted to pursue it. Unfortunately, that lead Vinny to bail on the show, and all of Izzy's eggs were now in a very fragile basket. Then, Lauren came in and gave Brett her date card. They seemed to have much stronger chemistry on their surfing double date, and the night before the rose ceremony, Brett politely pulled Izzy aside to let her know that he felt a "stronger connection" with Lauren.

She was devastated and left paradise immediately, but when the time came to give Lauren his rose and head into couple's week with her, Brett got cold feet.

"I just feel like I didn't really feel that spark like I thought I was going to here," he said during the rose ceremony. "That being said, I feel like I can't give this rose out tonight. Lauren, I apologize."

Later on, Brett admitted in his exit drive:

"You know, looking around all the solid couples, I felt like, at this point, I should be there, possibly, and I felt like I wasn't anywhere close. And I didn't want to take Lauren into tomorrow knowing that there was a chance of a fantasy suite and then maybe having to say, 'Hey, you know, we shouldn't do this 'cause it's too soon." I mean, I feel like it was the right thing to do. I didn't want to fake anything, I just wasn't feeling it, so I did what I had to do."

Ah yes, a classic case of the I'm Not Feeling Its. While this was especially devastating for Izzy, who had literally gotten dumped over the spark she felt with Brett, no one was expecting him to skip giving out a rose altogether, least of all Lauren, who had virtually been promised she would stick around.

Of course, the late arrivals to paradise are pretty much always there to potentially disrupt the strongly established couples, so is anyone really all that surprised that Brett didn't make it all the way to the end?