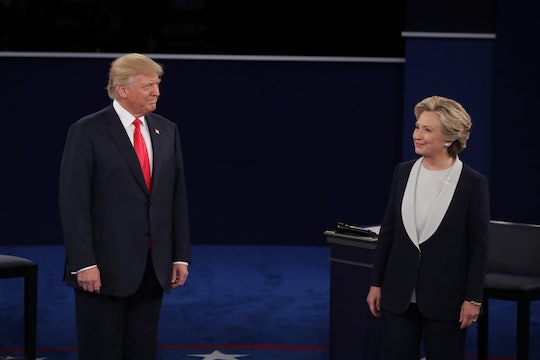 As they took the stage in St. Louis, the presidential candidates seemed to shoot daggers at each other with their eyes — which is a big departure from the normal procedure to shake hands. So, why didn't Hillary Clinton and Donald Trump shake hands at the second presidential debate? The simple answer: They reportedly legitimately despise each other. Or, at the very least, disrespect one another.

Even in past contentious elections, the candidates typically put on show that they respect each other to some degree. That isn't the case at this point in the 2016 presidential election. As Don Aucoin of the Boston Globe put it before the first presidential debate in September, "Seldom have two nominees genuinely despised each other as much as Trump and Clinton seem to, and never has a candidate been as willing to buck campaign norms as Trump has."

That became more true than ever in the days before the second presidential election when Trump defended his lewd comments about women by saying, "Bill Clinton has actually abused women and Hillary has bullied, attacked, shamed and intimidated his victims." Trump continued his low-blows campaign against Clinton at the debate by bringing several women who accused Bill Clinton of sexual assault to the stage.

One of the women, Juanita Broaddrick, said at a press conference before the debate, "Mr. Trump may have said some bad words, but Bill Clinton raped me and Hillary Clinton threatened me ... I don’t think there’s any comparison.” The Clintons have denied those allegations and Broaddrick's lawsuit was dropped in 2001.

By bringing Broaddrick and the other women along to the debate, it wasn't just a case of symbolic shots fired by Trump, but indeed one of the most personal attacks on an opponent in the recent history of presidential elections. So, in case anyone thought things haven't changed much since the days the Clintons attended Trump's 2005 wedding to Melania Trump... they have.

Meanwhile, Clinton's anger likely simmered throughout the weekend, during which time she didn't make any comments about Trump's unearthed 2005 tape. That meant she was ready to go after Trump when the debate got underway, which she promptly did by saying, "We have seen him insult women, rate women on their appearance ... we've seen him embarrass women on TV and on Twitter."

That was just the beginning of what was a very terse night between Clinton and Trump, who largely dispensed with the traditional niceties.