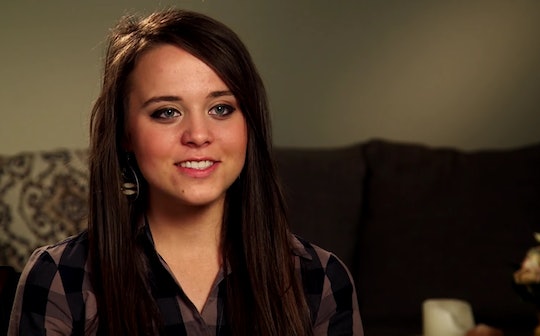 Jinger Duggar has always had a mind of her own. She's been the first of her 19 siblings to move out of her home state of Arkansas, one of the first of her female siblings to wear pants, and now one of the first to plan on delivering her baby in a hospital setting from the get-go. Although many Duggar sisters have tried to give birth from home, as their mother has, it was revealed in Jinger's birthing special on TLC that she never planned on having a home birth with her first baby. But why? Why didn't Jinger Duggar have a home birth or try to like her sisters have in the past?

Jinger and her husband, Jeremy Vuolo, welcomed their first child — a daughter, named Felicity Nicole — on July 19. The little girl weighed 8 pounds and 3 ounces, according to Us Weekly — and Jinger told Us Weekly at the time that she and Felicity were doing well. But, these were the only details about Felicity's birth that fans had gotten for a while — and it wasn't clear if Jinger had delivered her baby in a hospital or at home right away.

However, TLC released Jinger's birth special online just last week and it answered a lot of questions that fans had about the details surrounding Felicity's birth. Jinger revealed in the 20-minute special that she had both a midwife and a doctor that she visited throughout her pregnancy. And although she did make trips to a birthing center for appointments, she had planned on giving birth in a hospital in San Antonio, Texas, all along.

Why did she do that? Because she learned some very valuable lessons from her sisters.

When Jinger's older sister, Jill Duggar gave birth to her first son, Israel, in 2015, Jill told People that his birth "didn't go as expected." After 41 weeks of pregnancy, Jill had planned on giving birth to Israel at home, but after 20 hours of labor, Jill was transferred to a hospital where she delivered her son through a Cesarean section, according to People.

Jessa Duggar's birth to her first son Spurgeon, in 2015, was just as intense. Jessa did go through with having an all natural home birth, according to People, but was rushed to the emergency room after she delivered her son when she began bleeding after giving birth and had to have a blood transfusion.

Finally, Jinger's younger sister, Joy-Anna was also rushed to the hospital when she gave birth to her son, Gideon, this past February, according to People. Joy-Anna insisted on trying a home birth, but had to deliver her son through an emergency C-section after her midwife determined her baby was breech, or set to be delivered feet first, according to BabyCenter.

Sensing a pattern? Because of these complications, fans might understand why Jinger wanted to play it safe and deliver in a hospital without a lot of drama. During her birthing special, Jinger explained her birthing plan:

Jinger's midwife explained this even further during the birthing special:

Based on the family history, some of her sisters have had a harder time with bigger babies. Jinger, Jeremy, and I have talked at length about trying to see if we can keep this baby's size a little bit smaller. And maybe seeing if this baby could come closer to the due date instead of going a week or two over, which is typical for the Duggar women.

During the special, Jinger confirmed that she had visited the hospital she delivered at in San Antonio before. So, it's obvious that this decision to deliver in a hospital was something they thought out ahead of time.

"Some of my sisters have been through a bit of a tough time with their delivery so I have just decided to go ahead and switch to the hospital," Jinger said during the special. "I think that kind of puts me at ease, knowing 'OK, if I need anything, it's here.' And I think it will help me feel more relaxed in the long run."

Jinger did state after her pregnancy that she had been very afraid to give birth, according to Us Weekly. "I had heard so much about what it would feel like, the kind of pain I would experience and how difficult it would be, and it made me nervous," Jinger told Us Weekly. "But when the time came, I felt God gave the grace to cope."

Because she had seen her sisters go through some understandably scary experiences giving birth, it's no wonder that Jinger had been nervous when it came time for her to deliver her first child. But, thanks to her birth plan and decision to deliver in a hospital, Jinger was "at ease" and "relaxed" during Felicity's birth.

Although she might have strayed from "Duggar tradition" with her hospital birth, Jinger was simply doing things her way.