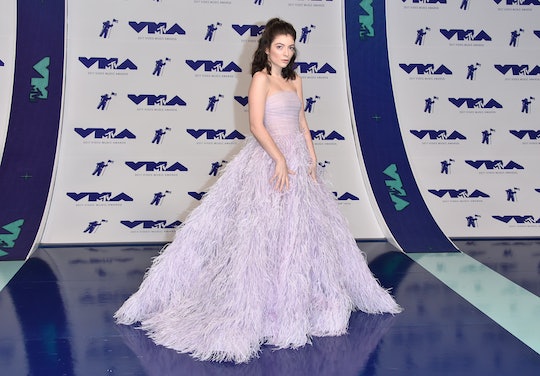 Why Didn't Lorde Sing During Her VMAs Performance?

Say what you want — Lorde is inarguably one of the best pop stars around. Her music resonates with people, and after a four year absence from the music world, her presence at any awards show is welcomed. So when she showed up to the 2017 MTV Video Music Awards, people were excited — but why didn't Lorde sing during her VMAs performance? Of course, she still put on an amazing show, but viewers were understandably confused!

Lorde was set to perform her song "Homemade Dynamite" off of her newest album release, Melodrama. Needless to say, fans were pretty excited — especially since the last time Lorde graced the VMA stage was in 2014 (and let's be real, a lot has happened since then). But fans were surprised when Lorde took to the VMA stage to perform... but never opened her mouth during the entire performance. Turns out, there wasn't a technical difficulty involved. Lorde was supposed to sing — until she got sick.

Shortly after taking to the red carpet in a stunning lilac dress, Lorde tweeted out to fans that she was very ill, needing medical assistance before taking the stage. "You can't tell in these pictures but I have the flu so bad that I needed an IV," Lorde said in a tweet. According to some Twitter users, the flu was indeed so bad that Lorde was understandably on vocal rest. How sad!

Without warning (or tweet from Lorde herself) Lorde took to the stage to dance out her song, instead of singing (or pretending to sing) at all. It's actually quite admirable of Lorde to not lip-sync and pretend like she was singing during the song and instead bring all of the attention to her interpretive dance routine.

Needless to say, flu and all, Lorde killed the routine, looking like she was having the time of her life on stage. In spite of the fact that no one knew how sick she was, Lorde took her jumps and high energy moves at full speed, putting all of the times I used being sick as an excuse to shame.

Sure, her routine could have been a So You Think You Can Dance audition or straight out of your high school talent show. But Lorde looked completely at home on stage at the 2017 VMAs and was so incredibly herself, doing her own thing.

In spite of being extremely sick, Lorde killed her performance.