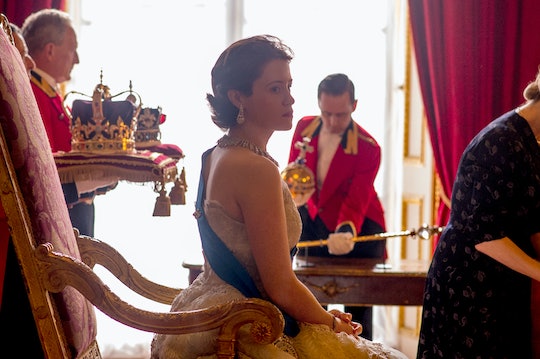 Why Didn't Queen Elizabeth II Change Her Name On 'The Crown'? It's A Common Tradition

Netflix's The Crown explores the reign of Queen Elizabeth II, who has sat on the English throne since 1952. (Fun fact: she's technically queen of 15 or so other countries as well.) She joins the ranks of Queen Victoria and Queen Elizabeth I when it comes to long-reigning English female monarchs, though Queen Elizabeth II has outlasted them both. The Crown looks to capture that impressive journey, starting from the beginning of her reign and provides interesting information about the monarch many people may not know — like the fact that she chose to keep her birth name when taking the throne. But why didn't Queen Elizabeth II change her name on The Crown?

There is something of a tradition in taking a new name when one ascends to the throne, but it's not something that everyone does. Elizabeth's father, King George VI, was born actually born as Albert Frederick Arthur George, but decided to go by King George once he was crowned. Taking on a different name during one's rule is called having a "regnal name" or "reign name," and because names are often repeated in royal lines, it tends to be followed by a number to indicate each specific person.

The regnal name is more formal, unlike the name a monarch uses casually in their personal life. Considering members of the royal family can end up with some pretty long names, it makes sense for them to choose different ones for their public and personal lives. However, Elizabeth decided to stick with her given name simply because it was her name. She just didn't feel the need to choose something else. Her regnal name only adds a number to differentiate her from the first Queen Elizabeth.

Names are important in royal families, and it wasn't only during Queen Elizabeth II's ascension that she had to make a decision about hers. Her marriage also posed a dilemma. Surnames are a tricky thing with the British royal family, as for years they didn't have one. Instead, they went by a House name that could double as a surname: for instance, Elizabeth's father George VI was from the House of Saxe-Coburg-Gotha originally, but this was changed to the House of Windsor due to anti-German sentiment during WWI. Similarly, Elizabeth's husband Prince Philip was from the House of Schleswig-Holstein-Sonderburg-Glücksburg and chose to adopt Mountbatten instead upon becoming an English citizen during his engagement to the future queen.

However, after becoming queen, the family wanted to prevent the name Mountbatten from being passed down through the line instead of Windsor, as would usually be the case in the patriarchal society we live in, where only men's names are given to their children. Elizabeth ended up keeping the name Windsor and passing that on to her children, though descendants without royal titles could use the hyphenated Mountbatten-Windsor (among other options).

Though Queen Elizabeth II's intentions for keeping her name throughout her life seem more practical than idealogical, it is pretty cool that she didn't buckle to any pressure to change it. Why should she have to? She is the queen, after all.