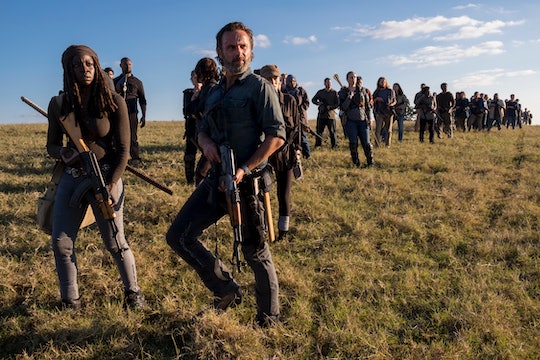 The war that consumed The Walking Dead throughout Season 8 ended with a whimper in "Wrath." After a sneaky move by Eugene took out half the Saviors, it came down to a one-on-one fight between Rick and Negan. However, despite wounding Negan, Rick decided not to end his life. But why didn't Rick kill Negan on The Walking Dead?

Rick was attempting to honor Carl by forging a path away from the violence that had dominated their lives since the virus broke out. It was a decision he had been inching towards since Carl died, particularly after learning the circumstances of his fatal bite from Siddiq; finding out that the bite happened while Carl was trying to honor the beliefs of Siddiq's mother (a woman he never even met) seemed to have solidified something for Rick. He came to the decision that his sense of mercy would have to overcome his wrath and need for vengeance, allowing for a more peaceful and positive world in the future.

Rick's plan was to imprison Negan for the rest of his life instead of killing him, even going to far as to save him after slashing his throat with a piece of broken glass. It wasn't necessarily an easy choice for Rick, but one he attempted to make for the greater good. Still, that doesn't mean everyone was on board with his decision.

Maggie was the most vocal about her dissent, and understandably so. She screamed at Rick that allowing Negan to live wasn't right. He and Michonne explained that the battle was over regardless of what happened to Negan, but Maggie argued that it would never be over until he was dead. He had killed Glenn — which in the show's timeline was little more than two months ago, making the trauma incredibly fresh — and that was unforgivable.

It's hard not to see Maggie's point of view. Not only did Negan control and terrorize several communities for years, but he killed their friends and loved ones with abandon. When he wasn't personally carrying out the murders, he led to them indirectly or ordered them to happen. Glenn, Abraham, Sasha, Denise, Spencer, Olivia, and countless others are all dead because of him. Is imprisonment really enough of a punishment?

Maggie definitely didn't think so, and neither did Jesus or Daryl. After everyone returned home following the showdown, she had a meeting with both men in her office at Hilltop, where she laid out a plan of her own. They were going to make their community as strong as possible so that it could withstand any tough situations that came their way, and then they were going to show Rick and Michonne that they were wrong to do what they did.

It seemed a little odd for Jesus to be Team Vengeance considering he's always been pro-pacifism, but Maggie and Daryl have very personal stakes in this. Maggie had to watch Glenn be violently killed in front of her, and now she'll have to raise their child alone. Daryl was kept a prisoner and psychologically tortured by Negan in an attempt to make him a Savior. They've both suffered specifically because of Negan, so mercy is definitely not their first priority.

Fans of the comics likely saw Negan's survival coming because the same thing happened in the source material: Rick slit Negan's throat but allowed him to live so that he could make a point about building a better world. Negan is left in a cell, but doesn't stay there for long; he ends up helping the Alexandrians defeat their next threat. However, it seems like the show might devolve into a civil war, as Rick's controversial choice will have major ramifications.