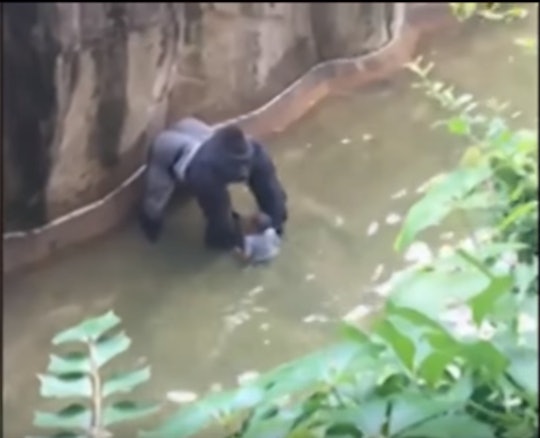 Over the weekend, a tragic accident at the Cincinnati Zoo and Botanical Garden led handlers to shoot and kill Harambe, a 400-pound silverback gorilla, in order to save a 4-year-old boy who had fallen some 10 to 12 feet into the gorilla exhibit. The incident has sparked renewed debate over the safety of zoo enclosures and the importance of protecting young visitors, but it has also raised questions over whether killing Harambe was actually necessary. For example, many have weighed in online to ask why the Cincinnati Zoo didn’t tranquilize the gorilla, rather than killing him. According to Cincinnati.com, zoo officials saw the incident as a potentially life-threatening situation, which meant they needed to act quickly.

According to that report, at around 4 p.m. on Saturday afternoon, police and emergency crews responded to reports that a 4-year-old boy had fallen into an exhibit at the Cincinnati Zoo. In an official statement posted on the zoo’s website, officials confirmed that the child had climbed through the public barrier at the Gorilla World exhibit. The child was unhurt by the fall and two female gorillas in the exhibit were immediately recalled by their handlers, according to the statement. But a third gorilla — a 17-year-old male named Harambe — grabbed the boy and began dragging him around, Cincinnati.com reported.

As documented in eyewitness video posted on YouTube, for several minutes after the child fell into the enclosure, the gorilla can be seen dragging the boy across concrete and through a moat in the habitat, throwing him repeatedly as zoo visitors watched. At a press conference on Monday, Cincinnati Zoo director Thane Maynard said that Harambe posed a threat to the child during the incident, mainly because he was acting out of character. “He was acting erratically, he was disoriented,” Maynard said, according to People. “It's due to his strength, that's where the danger was.”

The idea of waiting and shooting it with a hypodermic was not a good idea. That would have definitely created alarm in the male gorilla. When you dart an animal, anesthetic doesn’t work in one second, it works over a period of a few minutes to 10 minutes. The risk was due to the power of that animal.

Though Cincinnati Zoo officials have said they stand by their decision to shoot Harambe, others have gone online to criticize the child’s parents for not supervising him more closely. In the days after the incident, a Change.org petition to hold the child’s parents “accountable” for Harambe’s death has garnered more than 325,000 signatures. Zoo officials have said that those second-guessing the decision simply weren’t familiar with the potential harm that a silverback gorilla could do to a child.

In a clip posted on Twitter by BBC News reporter Victoria Derbyshire, Maynard explained why handlers were so concerned about the child’s safety that taking 10 more minutes to allow a tranquilizer to take effect wasn’t an option. “That child's life was in danger,” Maynard said. “People who question that don't understand you can't take a risk with a silverback gorilla — this is a dangerous animal." Maynard added, “looking back, we'd make the same decision. The child is safe.”

According to the an official statement from the Cincinnati Zoo, officials have decided to close the Gorilla World exhibit until further notice.