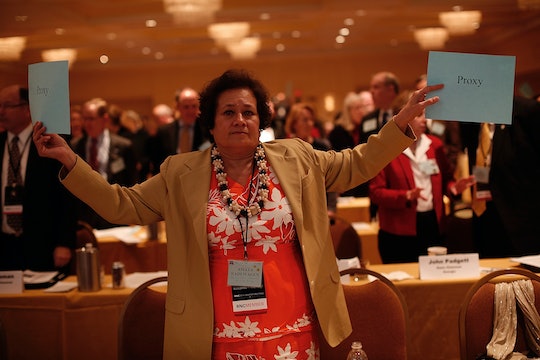 Why Do American Samoa Democrats Have A Separate Caucus? The U.S. Territory Holds Limited Privileges In The Election Process

Super Tuesday is right around the corner, and if you're paying attention to the details of the U.S. primary election and caucus system, you've probably realized that it's, well, bizarre. The question of why American Samoa Democrats have a separate caucus truly shows how labyrinthine the ins and outs of our electoral system can be.

If you're scratching your head because you didn't know that American Samoans had a caucus at all, don't worry—you're not alone. American Samoa, which is comprised of five islands and two coral attols near Australia, has been classified as an unincorporated territory of the United States ever since the early twentieth century, when the U.S. Navy occupied parts of the islands to set up strategic Navy bases in the South Pacific. Unlike other U.S. territories like Puerto Rico and Guam, the roughly 55,000 inhabitants of American Samoa don't enjoy the rights and privileges of U.S. citizenship. Rather, American Samoans are classified as "American nationals." American Samoans can't vote, and though they have one elected delegate in the U.S. House of Representatives, their delegate can't vote. Specifically, they're called a non-voting delegate, which is both depressing and an oxymoron.

American Samoa will send 11 delegates to the Democratic National Convention this year, and 6 of these delegates will be selected during a caucus that will take place on March 1—Super Tuesday.

The caucuses in American Samoa are a tad more low-key than what you see here on the mainland. While the Iowa caucuses, for example, involve thousands of separate locations, including churches, town halls, and restaurants, the Democratic Caucus in American Samoa will take place in one location. Specifically, it will take place at the Tradewinds Hotel in Ottoville, according to a Bustle interview with Sarah Rosier, the federal desk editor at Ballotpedia.

Rosier told Bustle that the number of American Samoans who actually vote in the caucus is "pretty small." She pointed out that in 2008, American Samoa was "one of the only caucuses to go for Hillary." Despite this past support for former Secretary of State Hillary Clinton, some are wondering if the American Samoa caucus might be a surprise win for Vermont Sen. Bernie Sanders because Tulsi Gabbard, a U.S. representative for Hawaii, recently resigned from her post in the Democratic National Committee in order to support Sanders instead of Clinton, according to Reuters. Gabbard is a native of American Samoa.

Whatever the outcome of the American Samoan caucuses, the territory's participation will hopefully serves as a reminder to the rest of the U.S. that American Samoans, though disenfranchised, serve in the U.S. military. According to NBC News, American Samoans send one-eighth of their citizens into the U.S. military. What's more, according to a Bustle interview with Neil Weare, president of the We the People Project, American Samoans have an Iraq and Afghanistan casualty rate that is seven times the national average. "They can't vote for the president that sends them to war and decides on all the issues that determine their lives,” Weare said.

Participation in the primaries seems like a small consolation prize for such service, but at least American Samoans are able to participate at all. Come Tuesday, we'll find out whether our Democratic friends in the Pacific will show up again for Hillary, or whether they'll pull through for Sanders.