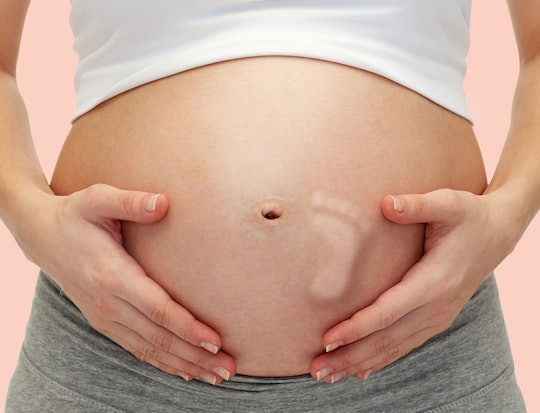 There's A Fascinating Reason Why Babies Kick In The Womb, According To New Research

When I was pregnant, I loved feeling my son kick. Sure, his movements hurt at times, but those kicks were a way for me to connect with my son. Still, even in those intimate moments, I couldn't help but think, Why is my son beating up my stomach? More so, why do babies kick in the womb? If new research is any indication, they may just be tiny cartographers in training.

A new study published Friday in the journal Scientific Reports found that fetal kicks in the third trimester may help babies create a map of their own bodies, according to ScienceDaily. In particular, researchers from the University College London measured brainwaves of 19 newborn babies who kick their limbs during rapid eye movement (REM) sleep, and discovered those fast brainwaves fire in the corresponding region of the brain, ScienceDaily reported.

In other words, if a baby moved their right hand during REM sleep, the fast brainwaves would fire in the brain's left hemisphere, which controls touch for the right hand, according to the study's findings. Researchers from University College London also found that the size of these brainwaves happened to be largest in babies born 10 weeks premature, the data showed.

These results, then, would suggest that fetal kicks during the late stages of pregnancy — when preterm babies would otherwise still be in the womb — may help grow the parts of the brain that control sensory input, as ScienceDaily reported. More so, those kicks may help babies develop a sense of their own body, according to the researchers.

Study author Dr. Lorenzo Fabrizi, a senior research fellow at University College London, said of the findings, according to ScienceDaily: "Spontaneous movement and consequent feedback from the environment during the early developmental period are known to be necessary for proper brain mapping in animals such as rats. Here we showed that this may be true in humans too."

This isn't the only study to analyze kicks and what they may mean for fetal development. A study published in January in Journal of the Royal Society Interface found that fetal kicks help shape a baby's muscles, bones, and joints, according to Live Science. Specifically, study author Niamh Howlan told Live Science, "the baby needs to move [in the womb] to be healthy after birth, particularly for their bones and joints."

So what does this research mean for fetal development? Kimberley Whitehead, who worked on the University College London study, said that their findings could help medical professionals improve sleep recommendations and practices for newborns, according to MedicalXpress. She said:

We think the findings have implications for providing the optimal hospital environment for infants born early, so that they receive appropriate sensory input. For example, it is already routine for infants to be "nested" in their cots — this allows them to "feel" a surface when their limbs kick, as if they were still inside the womb.

Whitehead continued, according to ScienceDaily, "As the movements we observed occur during sleep, our results support other studies which indicate that sleep should be protected in newborns, for example by minimizing the disturbance associated with necessary medical procedures."

Fetal development is fascinating, and the more we know about how babies grow, the better we can nurture that development. So kick on, little cartographer. Kick on.