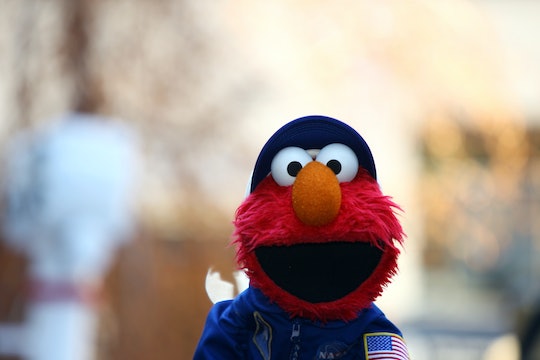 When my son was between the ages of 2 and 5, I would fall asleep hearing Elmo's high-pitched tones in my head. And it wasn't just because we watched Sesame Street every single morning — though we did. No, my son had an Elmo toy that would shout, "Elmo loves you!" and it was frequently activated by accident as he slept. The greeting never woke him, but for me, it fueled more than one nightmare. My son loved the crimson furry muppet above all else, and adored his voice. But why is that? Why do babies love Elmo and his high-pitched voice so much?

As it turns out, much of the reasoning behind why babies love Elmo's voice stems from our own habits of speaking to our babies using high-pitched, slow, soft tones, according to The Evolutionary Studies Consortium. These tones, which are rooted in evolutionary development that prime babies' minds to understand basic structures of speech, according to a report in The Washington Post, are often referred to as "parentese" or "momese." This is a crucial learning tool used by parents, and because of that, it's associated with warm feelings and contentment. As per Evolutionary Studies, these tones are mimicked in Elmo's speech, and therefore draw in your children like a muppet magnet.

When I was little, I loved Elmo. I had blankets, pillows, stuffed Elmos, and later I had an Elmo watch that I adored and wore all the way through eighth grade. I didn't say that I was cool, just that I loved Elmo. I never thought about my love of his silly voice as a broader reflection of the feelings I had for my parents, but it makes sense. However, scientists reported by Slate said that the love of Elmo — and by extension his voice — has as much to do with what he says as how he says it, and in what tone.

According to the website, "Elmo almost perfectly captures a toddler’s approach to and outlook on the world." He's curious, his vocabulary is simple and without guile, and he speaks in patterns familiar to young children. Tovah Klein, Director of the Center of Toddler Development at Barnard College in New York City, told Slate that Elmo is “just like toddlers who are in a exploratory stage of life — like little scientists, trying out and exploring what is around them, delighting in it." Your kids see the answers play out on the television. Things they want to know, he wants to know, and he says it in a manner they understand.

So why do babies love Elmo's voice so much? Because we've conditioned them to love it, and because the creators behind Sesame Street were able to capitalize on children's desire to learn with a lovable character. That "parentese" that we speak is reflected back in the tones of Elmo and Abby Cadabby, making them efficient vehicles to teach children everything from the alphabet to more complex topics like race and breastfeeding — all while the children smile and absorb what they say.

I'm not saying it's some diabolical plot by PBS to get into our homes and send subliminal messages for the Corporation for Public Broadcasting — I don't think that's the modus operandi of Sesame Street. They've just fallen on a character and voice combination that's particularly effective, and has proven to be perpetually beneficial for the children who are entranced by his personality and voice in every generation. In short, they fell on magic.

More Like This
Why Do Toddlers Throw Themselves On The Ground During Tantrums? They Have Their Reasons
25 Winter Solstice Baby Names For Your Magical Little One
40 Lovely, Lively, Lavish Girls Names That Begin With “L”
Baby Growth Spurts: When They Happen & What To Expect