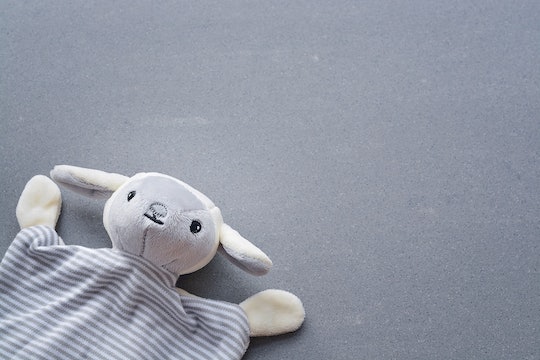 Many kids have security "objects" that they carry everywhere they go. My own kids have soft blankets that they still take on long trips, despite being in elementary school. A security object can be anything from a beloved toothbrush (yes, I've heard of toddlers taking one to bed with them), to a stuffed animal, to a favorite blanket. So why do babies need security blankets and should you be concerned? As it turns out, a child carrying a security blanket is no big deal. In fact, it's considered a normal sign of development.

There's no exact numbers on how many kids carry security blankets or objects, but it's thought that many do. "Growing up in the big world is scary for children, and security blankets, known in child development jargon as 'transitional objects,' help them transition from the familiar to the unfamiliar with more ease," pediatrician Dr. Bob Sears said in an interview with Parenting. He also said kids often bring their treasured "lovey" to bed at nighttime, because it's a scary time for children. They may also drag them around to strange places and around people they don't know.

Whether the object is soft, cuddly, fuzzy, or simply plush, they all can help toddlers relieve tension and anxiety, according to the Early Childhood Parenting website. No matter where the stress is coming from, a security blanket can help them cope. Children may hold them close to their nose or mouths before bed, at new places, or simply when they're away from their parents.

As noted in the aforementioned post, a young infant won't gravitate towards a security object yet because they're bonding with their mother and don't realize that she can go anywhere yet. Additionally, a young infant shouldn't be given any object in the first place that could pose a Sudden Infant Death Syndrom (SIDS) risk - like blankets - as noted on the Baby Sleep Site. As a baby gets older and more aware of their surroundings, they may be drawn to a security blanket or object as it's a source of familiarity, especially when a parent or regular caretaker isn't around.

Additionally, your child's attachment to a blanket or object doesn't mean they're not attached to you. There is no link between the strength of a parent-child relationship and their passion for their blankie or lovey, according to Psychology Today. How the child uses their blankie in a secured attachment relationship versus an insecurely attached relationship is certainly different, but the fact that they love them and use them appears to be universal.

As long as your child's security blanket or object isn't posing a physical threat, they're fine to carry it along. Your little Linus may freak out if you take it away to wash it from time to time, but that's normal too. A security blanket doesn't necessarily mean your child doesn't feel secure with you. They're simply finding a less scary way to navigate in the big world.

More Like This
Real Parents Share What Time They Let Their Kids Rip Into Gifts On Christmas Morning
What Exactly Is The Ferber Method? The Sleep Training Approach, Explained
Here’s What To Do If Your Baby’s Nose Bleeds After Suctioning
The 16 Best Subscription Boxes For Every Kind Of Kid