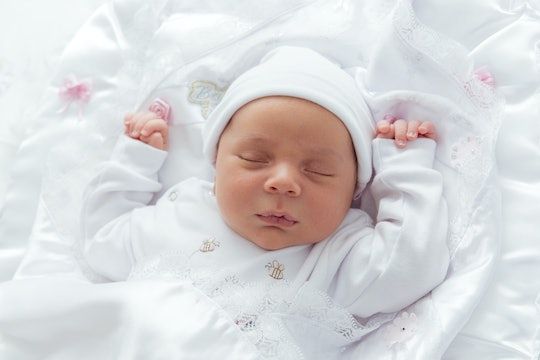 Getting babies to sleep is a several-times-a-day challenge. Parents employ routines that range from simply placing the baby in the crib to the more elaborate procedure, complete with a bath, bedtime story, soothing music, and more. While this is all personal preference and it's important to find the method that works best for you and your baby, you've probably been given one universal piece of advice: put your baby down on their back to sleep. But why is that babies should sleep on their back?

Back is best. This has been the recommendation from the American Academy of Pediatrics for over 20 years and it's repeated by every pediatrician in the United States. But why did this start? Your instinct may be to think that babies sleep more soundly and fall asleep more quickly while on their tummy, snuggled up to their lovey. It's so tempting to do it that way, especially when you are exhausted, but if all the doctors are telling you to do otherwise, there must be a good reason. Turns out there is. Putting babies on their backs has greatly reduced the incidence of Sudden Infant Death Syndrome (SIDS).

However, when your baby is old and strong enough to roll over from their back to tummy and back, you may wonder why they end up in certain positions. "[Your] baby prefers different sleep positions at different ages," according to the Dr. Sears website, so really, the reason why they may sleep on their back isn't more complicated then that, and that's okay. "After all, there is a meaningful wisdom of the body, even in a baby," the site affirms.

That being said, it's important to understand how the recommendation of putting your newborn or baby on their back to sleep came about. Well, with too many instances of babies dying in their cribs without a clear reason why, Congress passed the Sudden Infant Death Syndrome Act in 1974, in order to take a closer look. The National Institute of Child Health and Human Development (NICHD) was tasked with studying SIDS to understand why it was happening, to identify risk factors, and, most importantly, to figure out what could be done to prevent it. This research led to the American Academy of Pediatrics' (AAP) 1992 recommendation that babies be put to sleep on their backs. Two years later, the AAP partnered with the NICHD and the SIDS Alliance (now called First Candle) on the Back to Sleep campaign, which was highly effective, reducing the incidence of SIDS by 50 percent, according to The AAP.

Why might this sleep position help? It's possible that being on their tummies and faced down on the mattress restricts a baby's breathing, especially if sleeping on a soft surface. Dr. Ken Feuerstein, a pediatrician in New York, tells Romper it's important to make sure the baby's crib is safe, something the AAP backed up when they revised their Back To Sleep campaign to include instructions on safe baby sleeping environments, according to the California Department of Public Health. They recommend that baby sleep in a crib with a flat surface. This means no mushy mattresses, pillows, stuffed animals, or crib bumpers, as baby can asphyxiate with these around. Babble further explained that it's possible that sleeping on a plush surface can cause a little pocket to form around the nose and mouth of baby that could trap the exhaled carbon dioxide. The baby can then breathe in that carbon dioxide, which could reduce the oxygen in their system to levels low enough to cause death. Dr. Feuerstein adds that if your baby is congested and you think they need to sleep at an angle for better breathing, it's better to put something under the mattress (on the side that their head is) to prop it up, rather than giving them a pillow, like you would an older child or an adult.

You also want to resist the urge to bring your baby into bed with you, even if they sleep there on their backs, according to Dr. Feuerstein. As convenient as this seems, especially if you are nursing, there have been instances of parents unintentionally smothering their babies.

Unfortunately, once they can roll over on their own, it's hard to control. You can't sit and police them all night, flipping them off their bellies every time they roll over. Fern Hauck, MD and SIDS expert on Baby Center, explained that once babies can roll over, there's no need to reposition them every time. She also mentioned that 90 percent of SIDS deaths occur in babies who are less than six months, with the peak being in the one to three month range, so once they are able to roll over on their own, their risk of SIDS goes down.

So there are really good reasons for putting babies to sleep in their own crib on their backs. You can be creative with other parts of your baby's bedtime routine, but leave this part simple and just lay them down on their backs when it's time for bed.