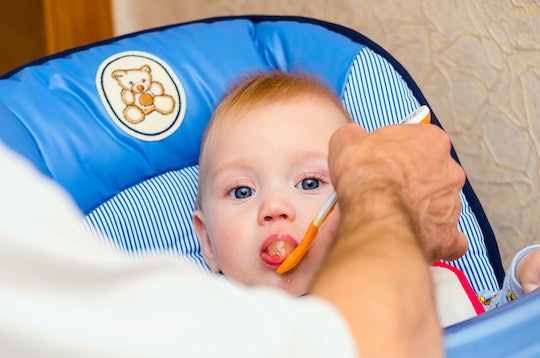 Feeding your child solid foods for the first time is one of the messier activities that you will accomplish as your baby matures. Whether you choose traditional spoon feeding or a baby-led approach doesn't matter in the grand scheme of laundry. You may notice that in the beginning, and throughout the feeding process, your baby might not keep everything neatly tucked in their mouths as they eat. Many of us chalk it up to their dislike of certain foods, or the general fact of being a baby learning to eat. But why do babies spit out their food?

The answer is a lot more complicated than most of us would imagine. I spoke with Cindy Hooks, M.S., CCC-SLP, CLC of Chew Chew Mama, LLC, and she tells Romper, “Babies spit out food typically as a developmental reflex that still exists called tongue protrusion. The reflex is trigger when the spoon taps the tongue and triggers the tongue to stick out. This is a natural reflex that newborns have that protects their tiny airways. Over time, this reflex naturally fades." However, this isn't the only reason — it's just the primary and most common cause for babies spitting out everything that goes in.

There's also some other sort of sensory-mechanical issues going on that might be stopping babies from keeping food in their mouths. If your baby is spewing forth their food back at you as fast as you're putting it in, consider how large the bites are that you're giving them. According to Hook, the size of the food "might be too large for your baby. It simply might be too much, so they're spitting back out." Spoon feeding your baby is a matter of safety and ease — you don't need to start training them for the Nathan's Hot Dog eating contest just yet.

Beyond just the mechanical, Hooks says that your baby's determination to ruin every one of your tee shirts by rocket launching puréed peas and squash onto you is partly due to evolution. They simply aren't sure if you're trying to poison them or not, so that unfamiliar food, delicious guacamole though it may be, is deemed unworthy. Somewhere, their underdeveloped hindbrain is screaming, "That orange stuff looks nothing like my trusty bottle. I should not swallow it."

That doesn't mean you shouldn't keep trying. I know that when I was feeding my babies, my mom used to tell me all the time, "You just hated XYZ, don't be surprised if your baby hates it, too." Apparently, that's not really accurate. "When beginning solids, parents typically see the tongue come out and assume that the baby does not like the taste or texture, but that is not usually the case," Hooks says. "Parents can avoid this response by offering initial spoon feeding presentations to the side of the baby's mouth near the jawline."

(Funnily enough, my MawMaw told me as I began spoon feeding my son, "Just get it past his teeth in his cheek pocket, and he'll eat it." I had no idea my MawMaw wasn't just making that up from experience.)

I always associated food refusals with texture and taste, but Hooks pretty clear that doesn't matter. "Texture only plays a role in refusals when more difficult textures are presented too early in the baby's oral motor development. Transitioning through stages of puréed textures allows babies to build the necessary muscles required to move into the next stage of eating," she explains.

If your child keeps pushing out the food over and over again, it's not a bad idea to bring it up to your pediatrician for evaluation. Other than that, just keep trying new foods, and Hooks says you should do your best to choose the best foods possible for your baby. She also suggests knowing basic life-saving practices for CPR and choking in your baby, just to be on the safe side. "Being in-tune with your baby, knowing what's happening, is the most important thing," Hooks says.

Until then, buy stock in OxiClean. You're going to need it.