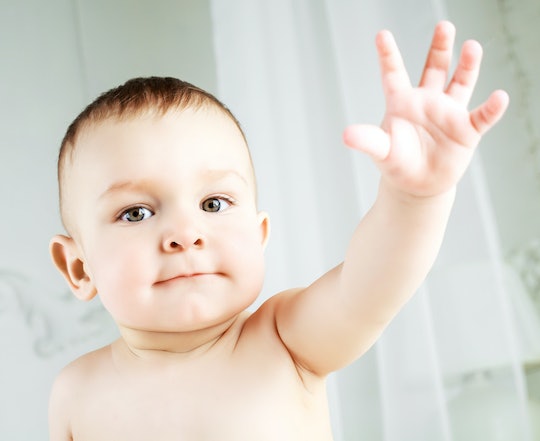 The Reason Babies Touch Themselves Is 100% Normal

Ever change your son's diaper and notice his hands venture downward as soon as you undo the sticky flaps on the diaper? You may be unsure at first of how to handle the situation or worried about him (or her — girls touch themselves too) developing a habit that isn't "normal" or "appropriate." If you find yourself searching "why do babies touch themselves" on the internet, hoping to find reassurance and some answers, there is plenty of info out there.

Just like babies grab their feet or reach for items close to them, they tend to also reach down towards their genitals. According to Psych Central it's normal for babies and toddlers to explore all parts of their bodies. It's not unusual and it doesn't mean that there's something wrong or "off" about your little one. Adults view that act as intimate and sexual in nature but, as DeAnn Davies, director of child development at Scottsdale Healthcare told Parenting, babies touch themselves out of curiosity. And according to the aforementioned Psych Central article, there is some research that babies begin to explore their bodies in this way while still in the womb.

So although you may be perplexed to see it happening, Dr. Marina Benjamen, author of the Psych Central article, wrote that it'd actually be stranger and more unusual if your baby wasn't touching himself. Though often occurring with babies when they are about 5 to 7 months old, as Davies told Parenting, it can also come up when children are around potty training age, when those body parts get more attention.

Although it's normal and healthy, What To Expect noted that frequent touching of oneself could be a sign that your little one is stressed. Your doctor can help you determine whether or not there's cause for concern and how to address any underlying stressors that you may not even realize are plaguing your child. Additionally, it's important to recognize that your reaction to these behaviors can affect how babies (and toddlers) understand their relationship with their bodies. According to Kids Health, responding without anger, shame, or overtly disapproving language can communicate that these behaviors aren't verboten, while responding with shame can result in children thinking that their natural curiosity is bad or wrong.

If seeing it happen during diaper changes makes you a little bit uncomfortable, handing your little one a toy or something else that will keep their hands busy and distracted while you change them can help shift his focus, according to Parenting. But, again, ultimately, it really is normal and generally nothing about which to worry.