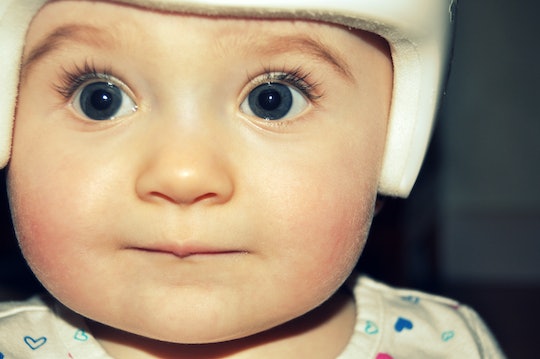 Why Do Babies Wear Helmets? Plus 5 Ways To Keep Your Child From Wearing One

Have you ever been out and about, noticed a baby sporting headgear, and wonder why babies have to wear helmets? No, it’s not a trendy fashion statement, and no, their parents aren’t being overly-cautious.This baby was most likely wearing a helmet as part of something called Helmet Molding Therapy — a fairly common treatment for babies who’ve developed flat spots on their head.

According to BabyCenter, babies are born with soft skulls that haven’t fully hardened to allow for passage through the birth canal and for the rapid growth that takes place in their brain. Because of this, Kids Health notes that many babies develop a condition known as positional plagiocephaly, or flat head syndrome, in which their head becomes flattened on one side.

The Seattle Children’s Hospital notes that positional plagiocephaly can be caused by several things, such a premature birth or delayed development, but it is most often the result of the baby’s sleeping position. Most babies are laid on their backs to sleep (as recommended to reduce risk of SIDS), but the baby can often develop plagiocephaly if they aren’t turning their heads often during sleep.

Though this isn’t a dangerous condition, and can usually be corrected either on its own or through the use of a helmet, there are several things parents can do to be proactive in reducing their child’s risk for flat head syndrome.