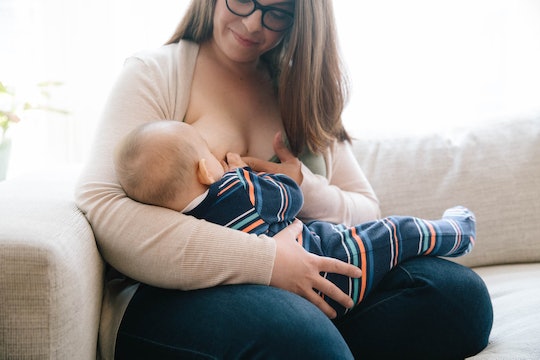 If Your Boobs Feel Like Boulders When You're Breastfeeding, Here's What's Happening

When I began breastfeeding my son, I understood that my breasts would change. I'd heard all about how big they'd get, how they would no longer defy gravity after I weaned my baby, and even that I would leak and spray milk. The one thing I wasn't prepared for was painful, granite-hard tatas that sat like boulders of weight on my chest. I knew it had something to do with my milk, but the explanation eluded me. Why do breasts get hard when you're breastfeeding? It turns out the answer is simpler than you think.

When you have a baby, hormones signal the body to begin milk production whether or not the baby ever suckles at the breast, according to the European Journal of Clinical Nutrition. Milk is produced in the lobules, and then it flows into the ducts where it is then removed from the breast by your baby's nursing, noted Virtual Medical Center. Your breasts might feel hard during this process simply because they're full, or in more extreme cases because they're engorged or you have a plugged duct. It all depends on the severity of the firmness and whether or not it's universal throughout the breast or regional and specific to only one portion of your breast, according to Infant and Young Child Feeding.

As someone who's experienced all three, I will tell you, you can definitely feel the difference. Full breasts are firm and almost hard. They feel like an overfull water balloon. When you touch them, you'll likely leak a little. )This is when those nursing pads really come in handy.) And if your baby cries near you, you'll get a full-on case of the tata tingles — and it's not comfortable. But engorgement is painful. I always thought my boobs looked like a bag of gravel, and they felt basically the same. Plugged ducts felt like a stone in my boob that was tender to the touch and warmer than the rest of my breast. They hurt so bad, and I'd have done just about anything to get rid of it at the time.

Thankfully, there are remedies for this madness. Bridget Halnan, infant feeding lead in Cambridgeshire, told the National Health Service that if breastfeeding is painful, you should "never put off asking for help early. Persevering on your own, hoping it will get better, may make matters worse." She focused on finding the cause of the problem, and working to eliminate that while treating the symptoms. As to why breasts get hard when breastfeeding to begin with, Halnan wrote that it could be anything from regular fullness, overproduction of milk, a bad latch, or something as seemingly silly as a badly-fitted bra.

Philippa Pearson-Glaze, International Board Certified Lactation Consultant (IBCLC) of Breastfeeding Support, wrote that another possible reason for firm breasts is just the nature of the milk coming in. She wrote that "many mothers will have some engorgement in the early days or weeks after birth. As the milk 'comes in,' extra blood and tissue fluids also come to the breasts to help with milk production. This causes congestion and swelling for a while." It's not just milk. It's milk, blood, and fluids needed to jumpstart the production. Pearson-Glaze agrees with Halnan and said that you need to seek assistance if the firmness becomes painful, because plugged ducts can lead to mastitis, a painful infection of the duct. It feels like you have a hot coal in your boob and it's blocking all escape routes. You don't want that. I also got quite the fever with my mastitis and almost passed out when they drained it.

According to a broad, multi-continent study published in Cochrane, the best treatment for engorged or full breasts is feeding your baby regularly, but not more than they need, and applying warm or cool compresses to the breasts when they begin to feel over-full. Pro-tip: the round "boo boo ice packs" that are in almost every kids' first aid kit are the perfect size to put in your bra, but don't put them right against your skin. Wear two night bras, and put them between the layers to feel the sweet, sweet relief. And don't feel bad about calling your doctor or lactation consultant about your rocky boobs — it's why they're there. They're more than happy to help.

More Like This
Is It Safe To Pump While Pregnant? Experts Weigh In
14 Recipes For Sick Kids When Everyone's Tired Of Canned Soup & Crackers
Why Your Vagina Smells Like Fish & What To Do About It
I Took Drinking Out Of My Bedtime Ritual & Unfortunately, It's Great
What Parents Are Talking About — Delivered Straight To Your Inbox