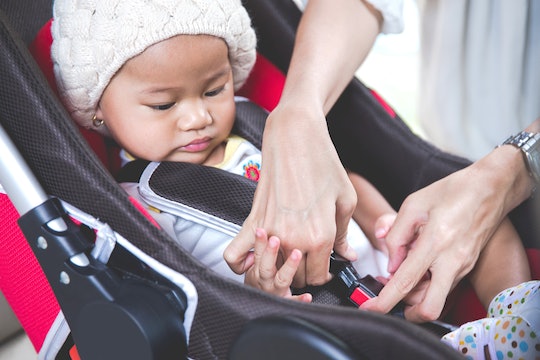 Yes, Car Seats Expire & Here's What You Need To Know

So, you shelled out a small fortune on the safest, most stylish, simplest-to-use, and comfiest car seat for your firstborn when he was just a wee little dude. Congratulations! Because that seat was so spectacular and your little is entering first grade now, it's time to dig it up from the garage and dust it off for your new newborn. Right? Well, not so fast. Unfortunately, car seats do expire, and it's a huge bummer for budget-conscious parents everywhere. Still, it's important to pay close attention to and obey that pesky expiration date, because your kid's safety could be on the line.

But why the heck would a car seat expire in the first place? It's not like it's a gallon of milk. There are actually a bunch of reasons why you can't use the same car seat for kid after kid, and why parents should be very careful about purchasing used ones. Before we get into it, though, let's just get this out of the way: The long-standing suspicion that car seat manufacturers implement expiration dates on their products as a scam to get unsuspecting moms and dads to buy new ones more often is a myth, and nothing more.

The expiration dates, which are typically six years after the date the seats was manufactured, are actually a vital tool for ensuring that even your smallest passengers have the safest travels possible.

The clock starts ticking on even the most well-made of car seat's lifespans the second they're all put together at the factory for reasons that, for the most part, are well beyond even the most vigilant parents' control. First, older seats won't have the up-to-date technology and meet current safety standards. According to Verywell, Lower Anchor and Tethers for Children (LATCH) don't really exist on seats manufactured prior to 2002, but it's now a standard safety feature across the board.

And that's not all. According to The Washington Post, car seats are, more often than not, exposed to extreme temperatures inside of cars. This can seriously degrade the plastic that makes up much of many seats and make it less safe and reliable over time. But even if you somehow have the energy to lug the car seat inside whenever it's not in use, the fact that car seats are safety-tested only for a limited lifespan should give you pause, as Verywell pointed out.

Then there's this to think about: The older a seat gets, the more likely it is that it has been a part of a recall that its owners aren't aware of, according to Verywell. What's more, replacement parts for older seats are generally unavailable.

Despite all this, pinning down your seat's specific expiration date can be a bit tricky. That's because, according to NBC 5 in Chicago, they're not mandated or regulated by the government. As a result, there's no standard for how big the communication has to be, where on the seat it needs to be, or what it should say. Typically, though, there's there's a sticker with the product's serial number, manufacture date, and expiration date, The Washington Post reported. Check the sides and the bottom of the seat for that.

Even though it kind of stinks that parents with expanding families need to buy new car seats every several years, there is one happy revelation. There's actually no need to spend a small fortune on the very best seat. According to The Bump, the most expensive seats are not necessarily better or safer after all, because all seats are regulated for safety.

So, happy car seat buying — because you might be doing it a little more often than you'd originally planned.

More Like This
What Is Monkeypox & Should You Be Worried? Here’s What You Need To Know
Ashley Graham Reveals She Lost “Liters Of Blood” After Twins’ Home Birth
Kourtney Kardashian & Travis Barker’s Kids Had Roles In Their Wedding
'Operation Fly Formula' Begins With 78,000 Pounds Of Baby Formula