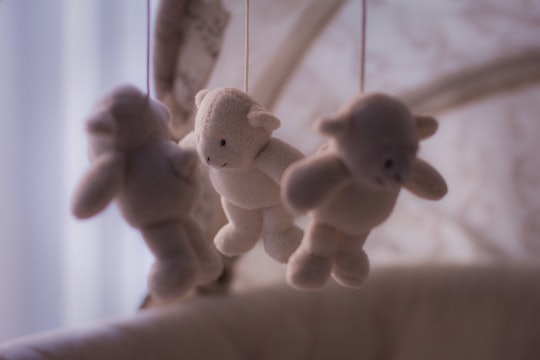 Why Stuffed Animals In Cribs Are A Major No-No

For newborns who sometimes spend the night howling instead of sleeping (and keeping their parents awake), perhaps a toy or a cuddly Teddy bear could be of some comfort? Experts on the subject say absolutely not, and there's a very good reason why doctors strongly recommend parents keep stuffed animals out of their babies' cribs. Simply put, introducing loose items into an infants' sleep space increases the likelihood of sudden unexpected infant deaths.

According to the American Academy of Pediatrics (AAP), babies should sleep on a firm sleep surface free of blankets, pillows, stuffed toys, and bumper pads until they are at least 1 year old. The reason for this is simple: Any of these objects could cover babies' faces and suffocate or even strangle them. In fact, about 900 babies died of accidental suffocation in 2015, according to the Centers for Disease Control and Prevention (CDC). These types of deaths accounted for one-quarter of all sudden unexpected infant deaths that year.

The good news, though, is that they are generally pretty easy to prevent — even it means that your little one can't enjoy that stuffed bunny or elephant throughout the night at least until she's able to lift her head all on her own.

For a safe night's sleep, start by lying your baby on his or her back, the March of Dimes suggests. The sleep surface should be flat and firm — and, of course, it's imperative that the crib or bassinet meet the safety standards of the Consumer Product Safety Commission. It's best to avoid bed-sharing, as well as cribs with drop-side rails.

While the official rule of thumb is to let babies snooze toy- and stuffed animal-free, some experts believe that it's OK to introduce some accessories when babies are closer to six months old. "A small, crib-size blanket is fine for a child who can lift her head and can push it off or crawl out from under it," Jennifer Roche, a pediatrician in private group practice in Amherst, Massachusetts, told Parenting.com.

In any case, it's important to be incredibly careful which stuffed animals children enjoy once they do get to have them. According to What To Expect, any toy with features make of buttons, beads, or any other accessory that could fall off is a no-no. Ditto for wires, ribbons, strings, and anything else that dangles. They should have sturdy constructions, and, of course, be washable.

Before you know it, that fussy newborn will be a preschooler relaxing on a bed covered in stuffed animals every night. But for now, it's better to be safe than sorry.