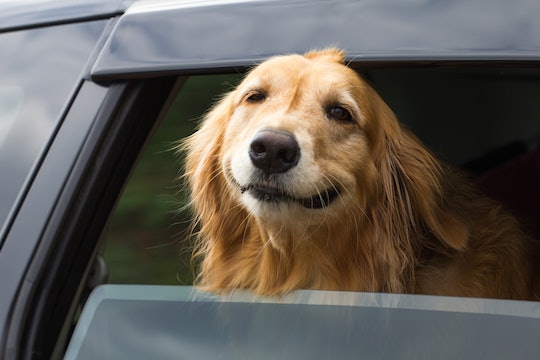 Here's Why Your Best Good Dog Is *All In* When You Ask Them, "Wanna Go On A Ride?"

If you've ever wondered what it looks like for a dog to darn near wag their tail off, look no further than my dog about to go on a car ride. You can imagine the dialogue happening in her tiny noodly head. "Oh my gosh, going on an adventure. Oh my gosh, vroom vroom, here we go." She cannot hang. She is just too excited for life at that point. Weirdly, all of my dogs have been that way. I have never understood the phenomenon. Why do dogs love car rides? Because honestly, they're not that exciting and bacon is rarely involved.

Strangely enough, the reason why dogs love car rides so much has nothing to do with any porcine flavored special treat — at least, as far as scientists have posited. Although there is essentially zero real research done on the subject, some researchers have hypothesized why it might be. Dr. Melissa Bain, a veterinarian at the University of California, Davis, is a specialist who researches animal behavior and told Car and Driver that because of how sensitive and curious dogs are, they are naturally inclined to get excited about car trips as ways to ingest more information about the surrounding world. It's not precisely a "high, per se," she said, “but they are getting a lot of input at higher speed.”

I asked my husband, who has had extensive interaction with professional dogs and training through his work as a police officer in New York City, and he tells me that their dogs always look at car trips like it's the beginning of something fun — the start of the hunt. There's nothing more rewarding for them than a good day's work and belly scratch, and that all begins with the car trip. Even long after those heroic dogs retire with their families, they still get incredibly excited the minute they hear "get in the car."

This notion of "the hunt" is outlined clearly by the experts at Natural Dog Training. They wrote that "dogs love car rides because they feel as if they are on a hunt." This behavior also explains the difference between cats and dogs' reactions to car rides. Cats are at best indifferent to car rides — at worst they display antagonistic behaviors. Cats don't feel a hunt; they hunt by instinct. Dogs hunt using their senses, their feelings. These feelings are triggered as the car moves through the environment at speeds that the dog would not be able to achieve on their own.

Stanley Coren, a dog behaviorist and professor of psychology at the University of British Columbia, told The Globe and Mail that there are ways to make your dog even more excited when you take them on a car ride. He said, "If you crack the window a dog gets a kaleidoscopic view of the world through his nose" — something for which I am keenly grateful that humans do not. New York City smells bad enough as is. Coren continued, "the scents are changing all the time. We [humans] are visual animals … A dog lives through his nose." They are constantly taking mental notes of these scents and banking them for future use.

It's easy to guess why dogs love car rides when you consider how attuned they are to the world around them, and how focused they become when learning new things. My dog remains a mystery as she falls asleep almost immediately upon the beginning of any journey in the car. Perhaps it's the possibility of it all that makes it exciting. Sort of like when I look at Manhattan real estate on Zillow.