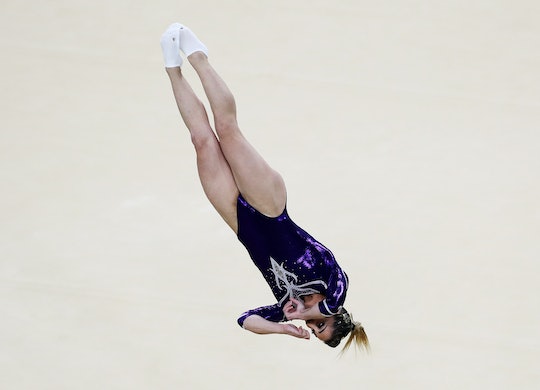 Why Do Gymnasts Wear Socks On The Floor Exercise? An Investigation

If you've paid attention to gymnastics in any capacity over the past few years, you might've noticed that gymnasts (and most notably, Olympians) competing on the floor exercise have started wearing socks during their performances. And on Tuesday, August 9, at The Olympics in Rio de Janeiro, Brazil, there were no shortage of socked feet. So why do gymnasts wear socks on the floor exercise? According to TheGymter.net, socks "basically give you a better grip on an apparatus" and they also "help gymnasts get turns around on floor, and some have a little padding so they can help with skills that pound their feet."

Not every gymnast wears them (some forgo socks entirely) so it makes sense that, depending on the individual's needs, she (or he) might opt for socks to help get through a routine riddled with twists, turns, and high-flying, hard-pounding skills. On Tuesday during the Team All-Around competition for women in Rio, several gymnasts opted to wear socks during their floor exercise routines, while commentators noted that the socks often help the gymnasts with their turns and also work to prevent sweating. But here's the thing: There's no doubt in my mind that these sock-wearers are wearing your standard, over-the-counter, run-of-the-mill brand slippers. Given that it's The Olympics, I'm willing to bet gold that they splurged for the expensive brands, you know?

Sock shaming sort of became a thing during the Team All-Around competition, and I think it's worth noting that there's nothing wrong with opting for socks ahead of a huge, terrifying event that millions of people are going to be watching. As a self-professed woman who literally can (and will) sweat through anything, I think opting for socks ahead of the floor routine would offer a gymnast a much-needed layer of protection. First off, my feet are ugly AF. Would I want anyone to have to look at them? Hell no. Would I want a judge (or a cameraman from any country) to be eyeing these bad boys while I'm supposed to be dazzling and wowing the crowd and my country back home? Your bet your front layout aerial I don't. As if rocking a permanent wedgie wasn't enough, yes, please, let's talk about my feet.

Could you imagine if a judge docked even a tenth of a point because you're the proud owner of Hobbit feet or unseasonably long talons? No, you couldn't, because that's embarrassing as all hell. (And let's not even consider the time I'd spend wondering if a judge docked points because of my feet.) Secondly, ahead of every event (and in between events), the athletes competing are quick to throw their warmups back on, which just leads me to believe that it's freezing in these stadiums. I can't even make it through summer in my office without leaving ample layers out so I don't shiver to death, so I can't even imagine what it must be like to be sweating, nervous, totally afraid you might not stick your landing, and freezing on top of it all.

The Gymter.net continues that "some gymnasts prefer to wear [socks] because of that extra grip or traction" they provide. So I'm going to chalk up (see what I did there?) the newly popular footwear to the fact that the Olympians competing in this year's Games are just looking for a little extra support. And if that leads to a Perfect 10, it's worth it.