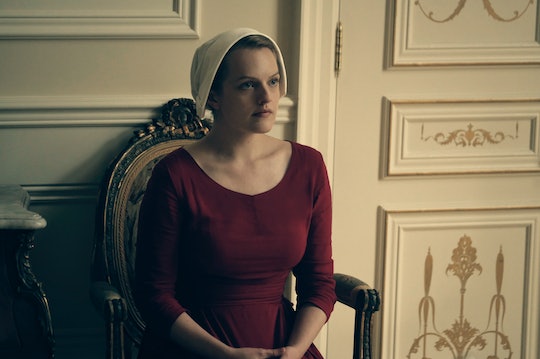 Handmaids Are Stripped Of Identities On 'The Handmaid's Tale'

Early on in Hulu's The Handmaid's Tale, the protagonist Offred revealed that she once went by a different name, but it was now forbidden for her to use or share it. As new handmaids were introduced, a clear pattern started to emerge with their names: Ofglen, Ofwarren. The names seemed to be interchangeable, too. When Offred's shopping companion and friend Ofglen was replaced, her replacement also introduced herself as Ofglen. But why do handmaids' names start with "of" on The Handmaid's Tale? The explanation is both simple and horrifying.

The women who were forced to become handmaids were stripped of their identities in every possible way; as Offred said in one episode, they were reduced to "walking wombs," every facet of their individuality erased. Even their names were taken from them. Instead they were given titles taken from the names of their Commanders, who, by the law of Gilead, essentially owned them. Offred's Commander is Frederick Waterford, so she became Offred: as in, "of Fred." If and when she moves on to a new assignment, she would get a new name and the woman who came in after her would take on the title of Offred. That explains why Ofglen's replacement was also Ofglen. The handmaids were allowed no identity of their own. They were only defined by the men who had complete control over them.

In the original Margaret Atwood novel that the show is based on, Offred's true name was never revealed. In one scene where Offred discussed her time in the Red Center, she recounted how she and the other women would whisper their names from bed to bed at night as a way of asserting that they still had a connection to their real lives. All of the women whose names she listed — Alma, Janine, Dolores, Moira, June — were later accounted for except for June, leading fans to speculate that that was Offred's real name. However, it had never been confirmed until the Hulu series.

When Offred revealed her name at the end of the first episode of the show, it made a clear statement. Even though the handmaids had lost their families, their jobs, their homes, and their autonomy, Offred's refusal to give up entirely was heartening. She only spoke her own name in her thoughts, but it was still a way of rebelling and reminding herself of who she was. With their ability to denote rank and control perception, names are incredibly important in Gilead. By holding on to her own, Offred maintains a shred of independence. Commander Waterford does not define her. Her name is June and she is no one's property.