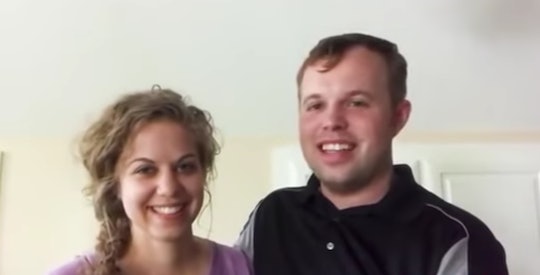 When it comes to social media, there are two types of couples: Those in which each partner has their own account and those who have a single, joint account. Nearly all the couples on my friends list, at least, have individual accounts. However, it's still relatively common for married couples to slap both of their names on the same account and call it a day. (The reasoning behind this seems to vary, depending on the relationship.) With this in mind, fans of TLC's Counting On who keep up with the Duggars on social media have probably wondered at some point: Why do John David Duggar and Abbie Burnett share an Instagram?

John David and Abbie first announced their courtship at the end of June, according to Us Weekly. “Abbie and I are just so excited, we’ve known of each other for several years,” John David, 28, told the publication of Burnett, 26. “We fell in love very quickly and it’s been a wonderful journey thus far." Just a month later, the couple had another big announcement to make: They're engaged! “Wow! We are engaged! This feels even more real than before! It was a special moment to share together,” Duggar and Burnett said in a joint statement, according to People. They continued:

The proposal and the ‘YES’ really solidified that we want to spend the rest of our lives together. One of the most amazing things about following Christ is being able to trust Him to direct your path and lead your life. We are so thankful that He led us to one another. Now we need to start thinking about a wedding!

As with many Duggar siblings before John David, entering into a courtship/getting engaged seemed to be the perfect time to finally start an Instagram account. Duggar and Burnett decided to go the joint route, using the handle @johnandabbie to keep fans updated about their journey together. Their very first post featured a photo of them, along with the caption, "So, I reconsidered the whole 'bachelor ‘til the rapture' thing." (LOL!)

As for John David and Abbie's reasoning for sharing an Instagram account? Your guess is as good as mine. The couple has only published six posts since starting the account in June. So maybe they recognized beforehand that they weren't going to be putting a lot of time and effort into Instagram — and they just made it easier on themselves by doing it jointly. Or, perhaps they wanted to make it easier for fans to find them. It's difficult to say, for sure.

For the record, it isn't exactly out of the ordinary for Duggar siblings to share a social media account with their significant others. Josiah and Lauren Duggar have a joint Instagram account, after all.

And so do Joy-Anna and Austin Forsyth.

Joe and Kendra Duggar, on the other hand, seem to have opted out of Instagram altogether. Jana — who is 28 and still lives at home, but isn't currently in a relationship — is nowhere to be found on Instagram, either. However, contrary to what In Touch Weekly had previously reported, Jana's social media absence isn't because of any Duggar Family rule that exists. This revelation came from a recent Instagram post by Jessa Seewald, when a fan asked why her older sister wasn't on the social media platform. "I think their family has their own rule that they can’t have their own social media until they are in a relationship," a different follower wrote, in response. Jessa shut down this long-believed theory pretty quickly. "It’s not a rule, it’s just coincidence, 😂" she replied.

And there you have it, folks! For unknown reasons, John David Duggar and Abbie Burnett share an Instagram account. It's pretty clear the decision wasn't motivated by any family rules, and was likely just a personal preference. And who knows? Maybe after they've tied the knot, John David and Abbie will choose to go their separate ways on Instagram. But for now, fans can find their latest updates in one, convenient location.