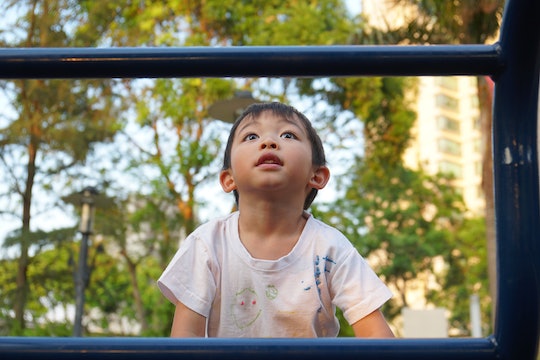 Up until last year, I would have monthly trips through my son's wardrobe to browse his t-shirts. I'd pick out the shirts that had been chewed through, holey and stretched, and toss them into a seemingly ever-growing pile of brightly colored rags. More than once in those years I wondered, why do kids chew on shirts? It's maddening, and also feels kind of gross.

When children are little, no one questions chewing behaviors, because they're considered a reasonable way for babies to learn their environment. They put everything in their mouths, noted Parents, which is why toys designed for babies are designed so that they won't choke on them. It's only when kids get older that it becomes a peculiar behavior. The National Autism Resources Network reports that many kids on the spectrum, with ADHD, or sensory issues are prone to chewing on things like their shirts, their pencils, or their fingers/nails. They noted that this type of chewing can be a calming mechanism, or a reaction to stress. Much in the same way adults may bite their fingernails or bite their lips.

For my son, who happens to be autistic and high functioning, chewing became a habit after a while. Yes, it was absolutely a matter of personal comfort, but more than anything, the older he got, the more it just became something he did. A bad (and expensive) habit, as it were. He didn't just chew when he was stressed, but would often chew his shirt absentmindedly as he did his homework, played video games, or helping make dinner. It took years to break him of the habit. We worked on redirection every time my husband or I saw him reach to grab the collar or sleeve of his shirt. It was honestly a full time job.

I contacted Diana Fitts, an occupational therapist with The Sensory Toolbox, an online store and website that focuses on kids with sensory issues. She tells Romper, "Some kids chew on their shirts due to a sensory need. Commonly known as 'stimming,' a behavior like chewing can give kids the sensory input they're craving. All of us engage in stimming, though some more than others." I know that I have a tendency to rock back and forth, or pull at my eyebrows when I'm worried or stressed. It's totally unconscious, just as my son's own stimming tends to be.

"Chewing helps kids focus and calm down. We typically see kids begin chewing on their clothes during the first week of school, especially in kindergarten," Melanie Potock, a pediatric speech language pathologist and feeding specialist, and author of Raising a Healthy Happy Eater tells Romper. "The chewing not only helps them focus on school work, but it also keeps their anxiety down." Potock urges adults to "think back to when they first took the SATs or the ACTs — it’s likely that most of the test takers were chewing on their pencils without even realizing it."

But there are ways to help this particular behavior, Potock says. "Provide a substitute that is intended for chewing. Chewable silicone necklaces are available for any age, are easy to keep clean, and last for months. Chewable, silicone pencil toppers are fun to put on kids’ pencils at school, yet make the perfect 'chewie' to provide the oral input the brain requires." My son did well with rubber thumb covers that are usually meant for sewing or paper sorting. It stopped him from biting his nails down to the quick, and chewing through multiple shirts.

Fitts says that while a kid chewing on their shirt is annoying, it "isn't a problem, but more so a sign that these kids need more sensory input throughout the day." It's best to watch and wait, and determine what your child needs, and how best to help them.