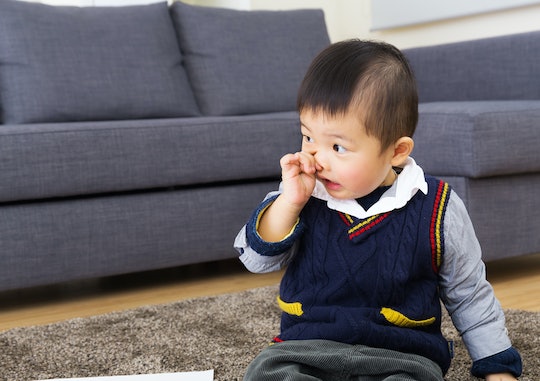 You look over at your little one and see it: a finger up his nose. He pulls it out, examines the booger and... decides to eat it. Ugh. It's the grossest of gross kid behaviors and yet so many of them do, so why do kids eat their boogers?

They probably eat their boogers because they taste good. Slightly sweet, slightly salty, a little crunchy, they are like Cheetos that live up your nose. They are also really available. All the kids need to do is just reach up onto their face and pluck them out. There's a good chance that the crusty snot in their nose is bothering them, they poke around to wrestle it from the nasal passage and then they see it there on the tip of their finger, knowing full well they need to do something with it. The most socially acceptable thing (after the totally socially unacceptable act of picking it) would be to find a discreet tissue, napkin, or even a piece of toilet paper, wipe it off their fingers and deposit the whole thing in a trash can. But why do that when you can just gobble the whole thing down. Boom. Done.

Are you grossed out yet? The truth is, there are some scientific theories that back some of these ideas up. In 2013, University of Saskatchewan biochemistry professor Scott Nasser got a lot of attention for suggesting that eating boogers can actually boost your immune system and make you healthier, as Popular Science reported. He theorized that the sweet taste was what attracted the kids to the booger eating, but what if all the pathogens that are in the snot, actually help to increase your bodies' immunity? It was an intriguing though, but Nasser wound up using it more to start classroom discussions on research (and certainly grab his students' attention) than to conduct an actual scientific study. Besides, we go back to the fact that with all the snot you are already swallowing, it didn't make sense that more of it, even the crusty kind, would really make any difference to your immune system, as the Huffington Post reported.

Boogers, after all, is just dried mucus, so maybe it actually isn't as gross as we think. Kids Health defined mucus as the "sticky, slimy stuff that's made inside your nose, airways, and even your digestive tract." Your body produces mucus to keep your nasal passages moist and warm the air you breathe and, importantly, it traps all the dust, dirt, bacteria and other germs you breathe in. You may notice that sometimes when you blow your nose, you can see some of the excess dirt and particles you may be inhaling. The mucus you blow out may be a little more dried and irritated than the stuff in your nose, but Kids Health said that you are producing about a quart of it a day, with most of it dripping down the back of your throat and into your stomach every day of the week.

The kids also might eat their boogers because they don't know any better. As the How Stuff Works site said, it could be they just haven't mastered social skills yet. Adults know that if you are going to pick your nose, it should be done in the privacy of your home or in your car when no one is looking. Kids are uninhibited and will full on pick their nose and eat their boogers wherever they are. They are in the moment and not really thinking about the judgement of others. They've probably seen their friends do it, so why not?

Whatever reason they choose, no physical harm will come to them if they do it, if that makes you feel any better. It's up to you to decide how much it bothers you, or if you're just going to let them eat it. Hey, it's probably not the worst thing they've put in their mouth by now.