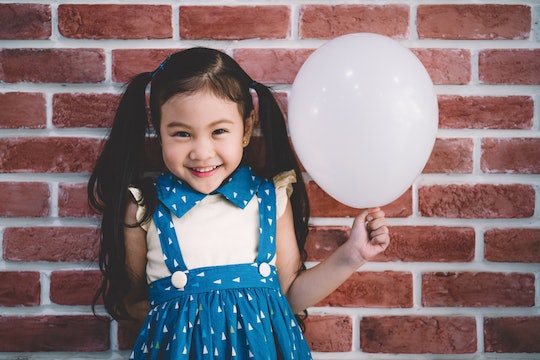 Any event where there will be children, there will likely also be balloons. They're a ubiquitous decoration and they're absolutely clutch in entertaining the children — truly, balloons are multipurpose party tools. What is it about these things, which are essentially tied sacks of gas, that make them so irresistible to the younger crowd? Particularly the very young. Why do kids love balloons?

While latex balloons are a nightmarish environmental pox upon us, they're also incredibly convenient when you want your child to stare aimlessly at something that isn't you for a few minutes. Tie a balloon to their foot, and BAM! You get 10 minutes of relative peace. It's hard to say no to that if you're on day 10 million of no sleep, no quiet, and you can't remember when you last brushed your teeth. The bouncing balloons affix your child's gaze like few other things. They're colorful, they seem to dance in the sky, and children love them. And let's face it, they're also ridiculously cheap. You can buy helium-filled balloons at drug stores, dollar stores, and party stores, and a plain balloon is about $1. Pretty priceless when your kid will stare at it until it's a shriveled version of its former self.

My kids both loved balloons. It was an all too convenient distraction for us because our bank is one of those that always has balloons for the kids, and every time I went in to get cash or rolls of quarters to feed my skee-ball addiction in Coney Island, they'd get a balloon. I was always incredibly careful with them, not letting them mouth the balloons. I knew that they were a dangerous choking hazard, but still, my kids had more than their fair share of inflatable fun. Let's face it, there are days when you just have to take the help where you can get it.

But why do kids love balloons? I contacted Kimberly S. Williams, Psy.D. Pediatric Neuropsychologist and Clinical Psychologist in Brooklyn, New York, and she tells Romper that one reason is actually quite simple. For babies and kids, "Balloons represent a party! Balloons are always celebratory and festive. They often mean other kids are around, and very likely that toys and other kid-friendly activities and fun foods are available." Kids and babies run towards the houses with balloons out front because they know that something good is going to be inside.

Another reason older babies and children love balloons, noted Williams, is that "the time with a balloon is limited." It's a finite gift to have this thing in their lives, and they know that. On a deeper level, Williams posits that it can serve as a measuring stick for their own skills of protection and preservation. "Children can unconsciously feel like the longer their balloon lasts, the better they are as a person... it represents them being protective, careful, and certainly one of their earliest experiences into being responsible." I remember vividly as a child wanting to protect my balloons at all costs; I would end up with bouquets of sagging latex after every party. Children understand more than we think.

As for the littlest of babies, balloons are simple entertainment of brightly colored fun that defy gravity. Even if it isn't filled with helium, it still floats and dances in the air as you play with it. There simply isn't anything else like it. Mobiles are fun and they play cool music, and ceiling fans are cool for a while, but they don't interact with space in the same way, and are therefore less interesting. So for now, balloons win.