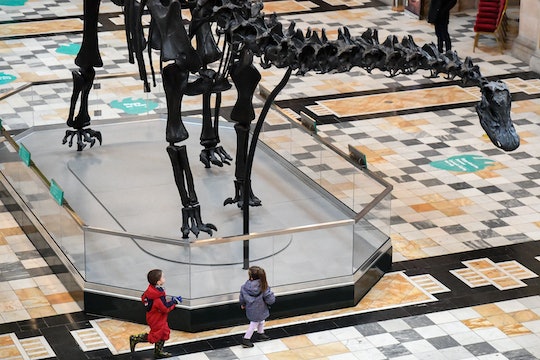 There was a period of time when my son was little that I had so many predators in the house, I should have feared for my life if they weren't all plastic. Hours of Dinosaur Train and Dino Dan were the norm of my life. Every time my son got in the car, he'd announce "Next stop! The cretaceous time period," and make the noises of a passenger train. At preschool, it was essentially all dinos all the time. Every single child was obsessed with the giant reptiles of old. But why do kids love dinosaurs to a point well beyond fascination?

It turns out that there is a real, psychological reason why children are so fanatical in their love of dinosaurs. Kelli Chen, a pediatric psychiatric occupational therapist at Johns Hopkins, told The Cut that the confidence boosting skills acquired by knowing so much about one thing is a big deal for kids. Dinosaurs aren't just fascinating — the information about their lives and histories is accessible to young children in various formats. You can read books, listen to podcasts, watch myriad children's programming, and go see their bones at the museum. Not to mention that the merchandise in the children's dinosaur industry is so detailed and wonderful.

This is nowhere near a new phenomenon, it's only that the programming has become so much more sophisticated. Millennials were raised with the cute dinosaurs of The Land Before Time and Ice Age, not to mention the weird, but wildly addictive television show Dinosaurs. (Which we can all still quote — "Not the mama!") But current kids' shows have actual facts and an educational aspect that our films and television shows did not. They're also decidedly less depressing than The Land Before Time, so ostensibly there's also less emotional damage inflicted in their viewing.

Chen told The Cut that “asking questions, finding answers, and gaining expertise is the learning process in general,” and that is a big factor in why it's all just so fascinating, and why children develop what's known as an "intense interest" in dinosaurs. We are creating the optimal environment for this interest to grow by encouraging this level of self-directed learning by teaching our children how to find more information, and how to learn more. Chen said it should be encouraged.

I contacted an expert in children's learning, children's librarian (and blogger) Nancy Schimmel, and she tells Romper that children are also drawn to the logic of dinosaurs. Yes they're huge and terrifying, but there's nothing otherworldly about them, so they're more easily understood. Plus, the fact that they're extinct makes them a more abstract idea that can titillate their imaginations without scaring them.

For a long time, I thought that my child's absolute obsession over dinosaurs had to do with my son being autistic. It was just one more thing to add to his list of obsessions, right up there with car wheels and watching the weather. Until I had my daughter. She was also obsessed with all things extinct, and could tell me all about how alligators and birds are really just dinosaurs and how the tardigrade is "basically a dinosaur water panda."

Brian Switek has a much simpler response for the question of kids loving dinosaurs. He wrote in The Guardian that dinosaurs are impressive and scary, and they've been dead for so long, they no longer pose any threat. "We first meet Tyrannosaurus and Diplodocus as children, their bones inspiring dreams, nightmares, and some of our earliest connections to science," he wrote. Those dreams grow and become curiosities in tiny minds that explode when given more information. It's the enrapturing connections that children make in their minds between what was, what is, and what could be, and to me, that's the biggest joy of being a parent — watching my children become enriched and excited. Even if you have the Dinosaur Train theme song stuck in your head for three years straight.