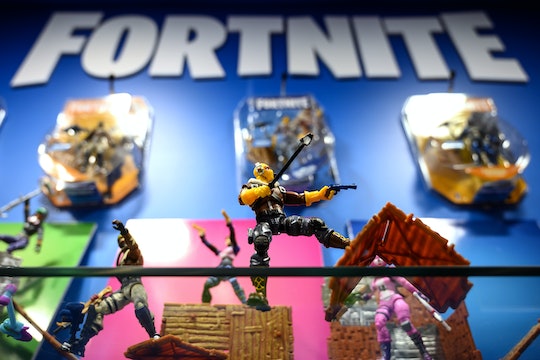 Here's Why Your Kid Is So Obsessed With Playing "Fortnite"

I am the mom of a 10-year-old with an Xbox, so I am very familiar with the cultural juggernaut and tween addiction known as "Fortnite." On any given night in my home, you can hear squeals of joy, cries of frustration, and a lot of talk about "tryhards" and "default skins." While I understand some of the lingo, having watched my son play a few times, I'll admit that I'm a bit confused as to the obsession, and I know I'm not alone. What's the draw? Why do kids love "Fortnite" so much?

The simplest answer, given to me by that very 10-year-old, is that it's "like, stupid fun, and there are llamas and a desert and a ghost town and you can dunk on the noobs and I am literally the best in my class in Battle Royale." If you could follow that, you're ahead of me. Essentially, it's what would happen if you crossbred Hunger Games with Wreck-It Ralph, and gave everyone a cool costume and a lot of ammunition. It's a cheerful, brightly colored, fast-moving, comedic death match. Kids can play with their friends, and there's never any lack of action or lull in the game. It's is the perfect embodiment of our anti-boredom culture that has become even more apparent in our children than in our generation.

Jennifer Powell-Lunder Psy.D. wrote for Psychology Today that much of what makes children love the game so much is that they were early adopters of the tech, and became enamored quickly. This was the design of the makers, Epic Games, who initially released the game for free. Powell-Lunder wrote that another big part of why kids love it is because it's a game they can win, noting that "even kids who are not usually gamers can win. The rules of the game are straightforward and uncomplicated." The funny dances help, the controversies that your children can no doubt give you a 40-minute exegesis upon help, and the graphics are fun, but in the end, it's not an impossible game that takes hours to complete. Kids can go on, play and win a game, and go to bed.

Not that they ever do that. To have a kid who plays "Fortnite," is to have a kids who is obsessed with "Fortnite." And in that obsession is the valid worry about the violent aspects of the game, and their effects over time. Leonard Sax M.D., Ph.D. wrote on Psychology Today that "playing video games where the objective is to kill people — games such as 'Fortnite' — over time, desensitizes gamers to violence." In an increasingly violent world, where school shootings are so regular that our 5-year-olds have lockdown drills before they learn to read, it is definitely something to consider.

The game isn't graphic. There's no blood, and no one blows up when they die — they just cease to exist or they come back to life. I don't know if that's better or worse, but compared to the video games I play, it's quite tame. And as Lisa Damour of the The New York Times pointed out, it's not all bad. She wrote that while there is no conclusive research available that concretely proves that playing violent video games makes one more violent, there is research out there to "confirm that action video games cultivate the spatial skills needed in advanced mathematics and engineering." In this day and age, where STEM learning is valued above all else, that's a big win.

So, why do kids love "Fortnite"? Because the engineers of the game did their jobs so well. They made a social game that started at an accessible price point that generated a huge amount of buzz. It's complex to play but simple to win, and it's truly just a ton of fun. My inability to adapt to the slang notwithstanding, I will admit that I don't mind spending the money on the skins if it makes my kid so deliriously happy. Plus, it's a good reason to break out my Carlton dance skills in public and just tell my kids — as they die of embarrassment — that it's my new "emote."

More Like This
18 Fun Mother & Son Halloween Costume Ideas
Where To Buy School Uniforms, From Jumpers To Dress Socks
These Back-To-School Supplies On Amazon Are Total Wins
18 Cute Notebooks That Make Every Subject Exciting