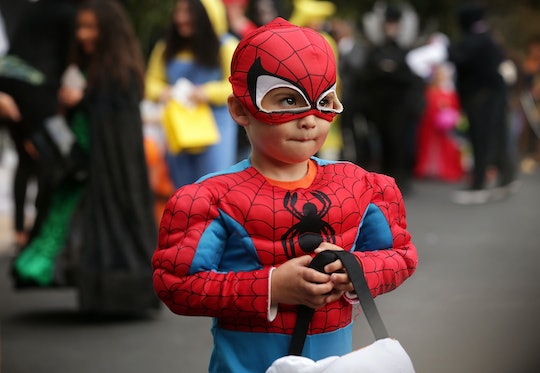 Kids *Love* Spider-Man, & The Reason Why Is Pretty Sweet

Over 56 years ago, when Steve Ditko and Stan Lee sat down to draw the first frames of Spider-Man, I don't think they could have possibly understood the cultural juggernaut they were creating. This character would be the lodestone of the Marvel Universe for younger audiences. Featuring a young teenage Peter Parker as its protagonist, Spider-Man has resonated with generation after generation of children across the globe. What is it about the magic that's imbued in the nerdy kid with superhero skills that makes it so attractive to children? Why do kids love Spider-Man so much?

When I asked my 11-year-old son why it is that he loves the character so deeply, his answer was simple and succinct: "Because Spider-Man is a kid like me, and he messes up, like all the time, Mama." According to my son, while the rest of the Marvel Cinematic Universe (MCU) is "like, really awesome and all," and, in his words, "bad a*s," they're all grown ups, doing grown up things, with grown up problems. The Black Panther is a king. Captain America was a soldier. Tony Stark "is a gazillionaire." None of them are managing the quotidian realities of adolescence while also doing something so extraordinary.

Stan Lee, for his part, had no idea how popular his character Spider-Man would become. Marvel noted that he once responded to a fan, saying, "It’s so indescribably thrilling to realize that so many people really care about a character I dreamed up and wrote so many years ago. Although it’s probably lucky I didn’t know how big Spidey would become in later years — because, if I suspected that, I’d have been too nervous to write the stories, worrying if they’re good enough for posterity to judge!"

Posterity has been kind to Spidey, and all it takes is a look through the pictures of every Halloween from his creation in 1962 to now, to see the impact the character has had on children. Halloween costume superstore Party City has consistently ranked different iterations of the Spider-Man costume in the top 20 in popularity for at least over the last 15 years. My husband went as Spidey in the 1980s, my brother in the '90s, and my son in the 2010s.

But why do kids love Spider-Man so much, to the point they routinely dress up like the beloved character? Spider-Man, for all his allure and power, is relatable to children. He's bullied, he struggles for social capital of any kind, and his real life is constantly falling down around him. But from the moment he was bitten by a radioactive spider, he had options, even if his home life remained less-than stellar. He represents a personal shift in how someone can perceive themselves, and also how even supernatural occurrences won't necessarily fix very natural problems, in a way that makes sense to children.

Spider-Man is also a fair bit more creative than his other superhero counterparts. He has super strength and speed, surely, but he's not the brute force brawler of Thor, or the tech genius of Tony Stark, and kids respond to the ways he works within his powers. He's smaller, like they are, he's younger, and he isn't set in his ways, so he's able to design intuitive solutions to his problems, much like children do.

Dani Di Placido for Forbes explained why this is so important, writing, "Instead of bluntly kicking, punching, slicing, he sticks criminals together. He flings them into walls and hangs them from the ceiling. His action scenes are always fascinating, regardless of the film, because of the convoluted way he must take down armed thugs." Much of this is by design. Spider-Man is younger and designed for younger audiences. The brutal nature in some of the other MCU films isn't present in Spider-Man because the artists and directors aren't trying to appeal to an audience that would enjoy that. They're appealing to young, creative minds who think creatively and respond in kind.

Spider-Man has always been a youthful character drawn for a youthful audience, and it is one of the most singularly successful creations when it comes to brand loyalty and devotion. Kids love it because it gives them an outlet to understand the hard stuff with just enough magic to make it separate from what they could be going through. In short, it represents "Excelsior," to all children.

More Like This
Tips For Apple Picking With Kids
The Little Vampire Is Just Scary Enough
Watch An Exclusive Clip From Trick or Treat Scooby-Doo!
13 Truly Scary Halloween Costumes For Kids