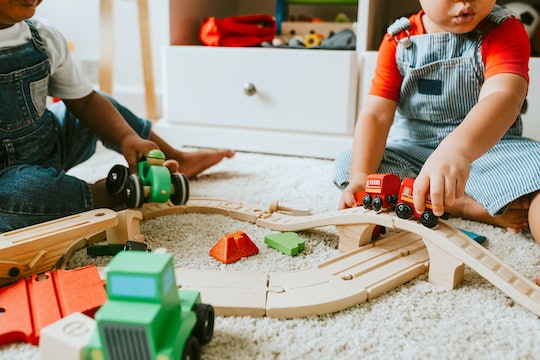 The Science Behind Your Kid's Obsession With Trains Is *So* Charming

I live in New York City. Here, trains are a way of life. Many of us find ourselves on at least one or two per day, and even with all of the train saturation, children still absolutely adore them. It makes me wonder why kids love trains so much. Why are my children instantly more excited about an activity if they get to take a train to get to it?

Katie Lear, a licensed children’s therapist and play therapist, tells Romper, "One reason kids may be so fascinated by trains is because they’re a fantastic learning opportunity, and children learn through play." Thinking about it, when kids are on the train, they are in the experiential part of learning, they are feeling the train move, and watching the landscape (or tunnels here in the city) fly by. When they are at home playing with toys, they get to be in command of the trains — the conductor of their own station. Children are observing the wheels, the interconnectivity of the cars, the way they move on a track, and it's all fascinating. Lear also says, "The set track helps kids predict the train's movement, and children learn about spatial relationships by observing how the train travels around." It's more structured than a toy car, and that predictability is calming.

I remember the first time I took my son to see the holiday train exhibit at Grand Central Terminal. He was around 8 months old, and his eyes just lit up with excitement. My son, the boy who never stopped moving, never stopped playing, came to a dead stop, fixated on the detailed train set as it looped around the miniature village and mountains. He couldn't pull his eyes away, and when we finally left the exhibit, some 45 minutes later, he wailed. That night, we bought him his very first train set, and he was captivated by it for several years after. Now, at age 11, some of the shine has worn off his wonder, but he still prefers taking the train to riding in the car, and he loves going to the Transit Museum with his little sister and checking out all of the trains through history.

And apparently, this fascination, this love of trains, is universal. Wendie A. Howland of Howland Health Consulting tells Romper, "Of course kids love trains. They move and make novel noises. But even more than that, they move in three dimensions and you can actually touch them with your hands if they’re toys, or ride in them if they’re real." The experiential aspect of trains I was discussing earlier? That's apparently a huge part of the draw for kids.

And this is the perfect time of year to explore kids' love of trains. There are all kinds of holiday and Polar Express-themed train rides all over the country. There are train shows and miniature train sets beneath the Christmas tree — it's a magical time of year for your tiny train enthusiast. Why kids love trains becomes immediately apparent as soon as you begin to observe the trains with them, as well as talking to your children about what it is that's so interesting to them. Trust me, they'll have plenty to say.