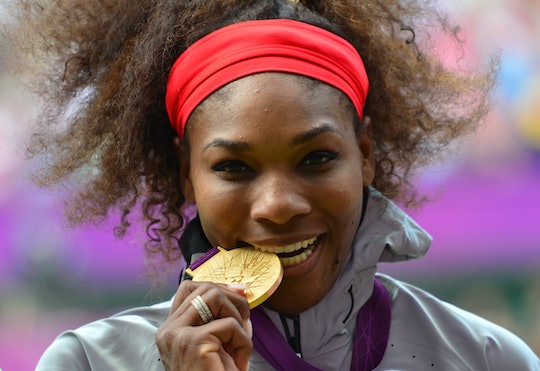 Why Do Olympians Bite Their Gold Medals? It's An Unofficial Olympic Tradition

Whenever Olympic athletes receive gold medals, it's a pretty likely bet that there will be photos of them trying to take a bite out of it. But why do Olympians bite their gold medals? It's a strange thing to do, to be sure, but it sounds like the photo op has, in a way, become a kind of rite of passage for medal winners. If you've dedicated your entire life to winning that medal after all, well, why not celebrate with a signature Olympic photo pose? But, according to CNN, even if you'd rather not risk leaving a bite-mark on your medal, chances are good you'll be asked to do it anyway: after the medal ceremony, winners are whisked away to be photographed by a group of Olympic photographers, who pretty much always request their subjects for at least one "biting the medal" shot. David Wallechinsky, president of the International Society of Olympic Historians, told CNN,

It's become an obsession with the photographers. I think they look at it as an iconic shot, as something that you can probably sell. I don't think it's something the athletes would probably do on their own.

Iconic shot or not, how did the tradition even begin in the first place? According to NBC News, it's thought that the practice probably began in a nod to the way that people used to test for counterfeit gold coins used as currency. Gold is a relatively soft metal, so biting a coin and leaving a slight indent was a sign that a coin was actually made of solid gold, as opposed to a gold-plated lead coin, which obviously would have had substantially less value.

The irony though, according to TIME, is that Olympic gold medals aren't actually made of gold — or at least, not entirely anyway. They are actually more like upgraded sterling silver medals, with about 6 grams of 24-karat gold used as a coating to make it look gold. In fact, according to NBC News, only about 7.5 percent of the medal itself is gold, making it a bit less impressive that the Olympic medals have been growing in size and weight over the years. The medals at the 2016 Rio Olympic Games are the heaviest medals in the history of the Summer Olympics at 500 grams each, according to Forbes, but are hardly the most valuable in terms of composition. That honor would likely go to any of the gold medals awarded before 1912 — the last year that Olympic gold medals were actually made of solid gold.

Of course, it makes sense that solid gold medals would have to be phased out just due to cost alone. To award athletes in the top spot with a solid gold medal would cost a whopping $22,000 each, which is a far cry from the estimated $564 value of the Olympic medals being handed out in Rio, based on the current price of sterling silver and gold. Although, since it's probably safe to assume that no one competes in the Olympics with the intention of melting down their gold medal and selling it for cash, regardless of the makeup of the medals, they are still hugely valuable for personal reasons (as well as memorabilia for sports collectors, if anyone ever did want to sell their medal).

Given that the medals aren't gold though, the logic of leaving a bite-mark isn't exactly sound, but that obviously hasn't kept many athletes from trying it anyway — even if they haven't won gold. According to NBC News, German luger David Moeller actually broke his tooth after biting his newly-won silver medal for photographers at the 2010 Winter Olympics (ouch).

So while Olympians might want to be careful not to crack their teeth in overeager excitement, the "biting the medal" photo seems like a fun way to embrace one of many Olympic traditions during their big moment. Winning gold is something that few people on Earth will ever experience, so, hey, why not take a bite to celebrate?