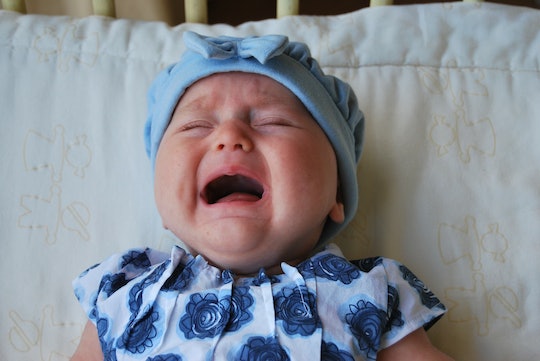 Why Do Parents Use Cry It Out? A Closer Look At Sleep Training

When it comes to getting your child to sleep through the night, there comes a time where you're willing to try just about anything. Sleep training can be controversial, and it can be difficult for many parents to let their children cry themselves to sleep, or "cry it out." But it's a method that many parents choose to use. So why do parents use "cry it out"?

If you're sleep training your child and you're sleep deprived, haven't showered in three days, and would kill for a few hours of silence, it can be tempting to pick your baby up to comfort them and stop the crying immediately, just for some peace of mind. Some parents worry that letting babies cry themselves to sleep is stressful for the baby, and can cause longterm bonding damage between parents and their children. However, a recent Australian study reported that there's no reason to fret.

According to CNN, researchers in Australia worked with 43 sets of parents who had babies between 6 and 16 months of age who were having trouble sleeping. The parents and babies were then divided into three different groups. One group of parents were taught about graduated extinction, a cry it out method where parents put their baby to sleep, and then gradually extend the time they wait to go in and check on their child. The first night, they wait two minutes. The next, four. Then six, eight, and so on.

The second group was taught about bedtime fading, a newer sleep technique where parents picked the time they'd like for their baby to fall asleep, and then pushed that time by 15 minutes for a few nights, and then another 15 minutes for a few nights after if their baby was still struggling to fall asleep. The idea behind bedtime fading is that once babies have been pushed past their usual bedtimes, they're tired, and they learn to put themselves to sleep more easily.

The third group, the control group, was not taught any sleep training methods, and simply received information about infant sleep.

Sometimes as a parent, you have to set limits with your children, and this starts at a young age. Whether it's replacing a pacifier 15 times, nursing three times, or picking your child up five times a night, these are all sleep associations that will make it harder for your child to fall asleep on their own during the long run. Which is why parents choose the cry it out method to help break negative sleep associations with their babies. In an interview with Slate, Marc Weissbluth, pediatrician at Northwestern University and the author of Healthy Sleep Habits, Happy Child, said that, when initiated properly, the cry it out method should take only three days for your child to adapt to. If it's taking longer than that, Weissbluth said parents may be approaching the method incorrectly.

Crying it out may not be for all parents, but if you're ready to try something new, if you're desperate to sleep for more than a few hours here and there, you should feel comfortable trying the method along with all the other parents who've managed to make it work for them. Because when sleep training is successful, you not only get a more well rested and happier baby, but a more well rested and happier you.