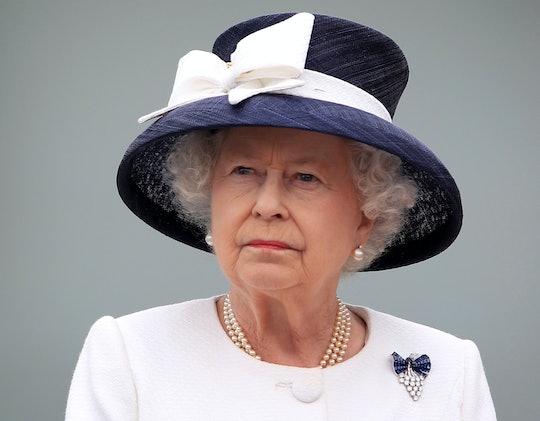 For many Americans, the concept of bowing to anyone out of loyalty is pretty foreign. After the Revolutionary War, the idea of making ourselves bow or curtsy before royalty became pretty outlandish to us as a nation. However, in monarchies the world over, bowing and curtseying is still very much a thing. The whos and whens of the practice though still trip up many an American. But, something people are noticing is the fact that Meghan and Prince Harry didn't bow to the queen at the wedding. But, why do Prince Harry and Meghan Markle bow to the Queen anyway?

Update: Meghan Markle and Prince Harry broke tradition during the wedding and did not bow to the queen as they exited their wedding ceremony.

Earlier: The land of bowing and curtseying is a bit like entering the fire swamps in The Princess Bride. There is actually a specifically drawn line of precedence of who bows before whom and when. According to The Telegraph, for the wives of the heirs, if they are in the presence of their husbands, they only need curtsey to Prince Charles, the Duchess of Cornwall, Prince Philip, and the Queen herself. However, if they're at a function alone, they must curtsey to all those princes and princesses who were born to the title, like Prince Edward, the Princess Royal, Princess Eugenie, and Princess Beatrice. When it comes to why Prince Harry and Meghan Markle bowed before the Queen upon the end of their ceremony, according to the official mandate of the Monarch, it's merely out of respect.

I'll admit, it's a bit of a shock to see an American curtsey to royalty. I mean, the only queen I bow to as a yank is Queen Bey. And, who wouldn't bow to Her Royal Highness Queen of All Things and Her Majesty Mrs. Beyonce Knowles Carter? Don't your knees sort of fall out from under you in her presence?

It's just so ingrained in the American psyche to bow to no man that the idea of bowing doesn't just feel strange to us — it looks strange. My guess is that Meghan Markle probably flinched inwardly the first few times she curtseyed before her family members as well.

Rumor has it that Prince Harry has taken to being her tutor in all things royal — and that's not a euphemism. The New York Post reported that "sources reveal that as the Los Angeles-raised actress prepares for a very public engagement and wedding, she is also being schooled in the ways of the Firm — the royals’ affectionate nickname for themselves. There’s no special 'school' where Markle will learn how to curtsy, hobnob with foreign dignitaries, or emerge from a car without flashing her underwear," but that it's being done by Prince Harry himself.

According to Customs and Conflict in British Society, the act of bowing before royals, especially at occasions like weddings, have somewhat terrifying origins, despite being brought down several dozen pegs in the succeeding years since the practice began. The author wrote that it has to do with the original idea that monarchs were put in their place by God, and therefore held special place in the world, and everyone else should bow before their awesome influence. Now, even though it's a mostly optional practice, as noted in official royal documents, it's still done out of respect to the position and the woman.

Honestly, even if a normal bow is just out of respect to a grandmother who Prince Harry dearly loves, it's understandable. While my late MawMaw would've laughed her butt off if I ever tried to curtsey before her, that doesn't mean she was any less deserving. It's respect and gratitude, both things of which the couple seem to have a surfeit.