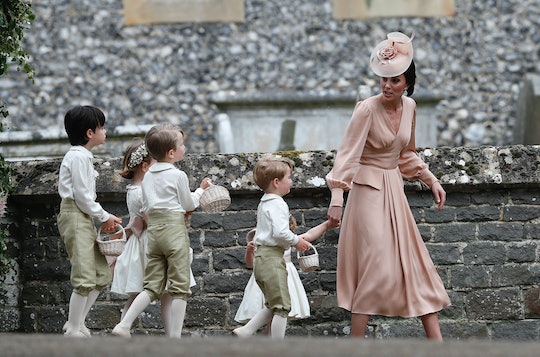 With the royal wedding buzz building, I'm just about ready to buy a fascinator to wear at 5 a.m. when I get up to watch the festivities that will take place across the pond. There's something about ornate hats and headpieces that make us think of royal British weddings, thanks to the somewhat recent wedding of the Duke and Duchess of Cambridge, Prince William and Kate Middleton in 2011. Come to think of it, why do royals wear ornate hats to weddings? There's a reasonable answer, as it turns out.

Royals wear hats to weddings because of royal protocol. Simple as that. They're some of the only people who still follow etiquette and dress code rules, but we're glad they're keeping very old traditions alive, if only for our sartorial pleasure on royal wedding morning. Diana Mather, a senior tutor for The English Manner etiquette consultancy told the BBC that "Dress code etiquette states that women wear hats for formal events," so that's what royals shall do.

There are three types of head accessories that fall under the "hat" category. London milliner Natalie Joy Richards explained the difference of each on her site: Hats cover the entire surface area of the head, cocktail hats are typically brimless and smaller than a hat, while fascinators are essentially headpieces with a base diameter smaller than four inches. The hat is the most formal of the three. The Queen and even the Duchess of Cambridge are likely to be wearing hats for such a formal occasion as the royal wedding, whereas women attending the nuptials who aren't as high profile might opt for fascinators.

While fancy hats have been around for a long time, fascinators have also come a long way since their invention in the 1700's. E! News reported that fascinators are only recently becoming more appropriate for occasions such as weddings, "Once upon a time, fascinators were made in factories, whereas hats were a more intricate process done by milliners themselves." Therefore, hats were fancier and a sign of status, not only an indication of occasion. However, "Nowadays these smaller head pieces are considered to be much more high end than they once were, and are often reserved for occasions in which you want to be courteous to your neighbors in regards to their sight lines." Like, say, a royal wedding, when you do not want to be that lady with the hat so big no one behind you can see the real stars of the show!

Irish-born milliner Marie Galvin gave royal wedding headwear advice for the American guests planning to attend Meaghan Markle and Prince Harry's wedding in Brides Magazine recently. "If Americans learned anything from Kate and William’s wedding, they will know that 99 percent of the guests wore hats. Go to a milliner who is experienced with special occasion headwear," she advised. "Most importantly, find your comfort zone and don’t go out on a limb."

Don't you wish you had an occasion to go to a special occasion milliner? Well, maybe you don't. Wedding hats and fascinators aren't cheap and can set you back hundreds, if not thousands of dollars. Well-known London milliner Philip Treacy doesn't even offer prices on his website (never a good sign for the budget conscious), but you can buy some of his stunning creations straight from Harrods for a few thousand dollars.

While Americans are just getting on board with fascinators, having fallen for them at the time of the Duke and Duchess of Cambridge's wedding several years ago, Treacy has long predicted that fascinators are on their way out. In 2013, he told The Times, “Mass production means that they became so cheap to produce that now they are no more than headbands with a feather stuck on with a glue gun. We’re seeing a return to proper hats.”

But if the Duchess of Cambridge's style is any indication, it seems that this tradition is still of upmost importance. And now that the royal wedding is near, we can't wait to see what unique headpieces the guests will show up in, especially Princesses Eugenie and Beatrice — they always come up with something memorable.