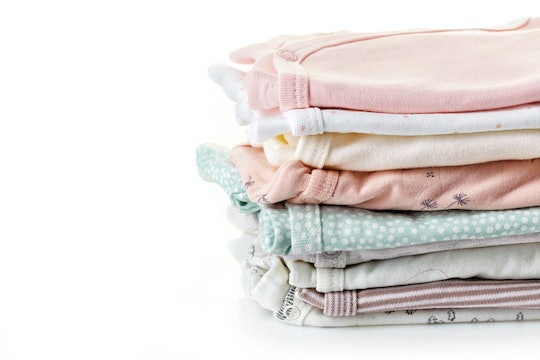 This Is Why All Your Stored Baby Clothes Look Yellow

If you've ever gone to retrieve clothes that have been stored for any length of time, you've probably noticed that they might not look exactly the same as when you stored them. Namely, they look a little yellow, or are covered in yellow stains — especially your baby's hand-me-downs. But why do stored baby clothes turn yellow? It turns out that it's pretty simple.

According to the cleaning experts at The Spruce, it's caused by a chemical reaction that occurs between chlorine bleach and fibers of your clothing. The bleach begins to break down the fibers of the fabrics, and it causes them to turn yellow. While it's more common in man-made fabrics, all natural fabrics such as cotton and linen will eventually begin to oxidize as well.

I spoke to chemist Allen Charles and asked him why stored baby clothes turn yellow. He tells Romper, "All things can and will oxidize if exposed to air. With fabrics, it's just more apparent in the light colors than it is in the colored fabrics, but it's happening to all of them." He says that the compound in bleach that gives it its distinct smell — chlorine — speeds up the process by opening up the fibers, fraying them, and creating more surface area for oxidization to occur. Also, bleach in itself leaves a residue that, when exposed to air, will begin to yellow fabrics.

Charles tells Romper that "baby clothes also spend as much or more time in storage than they do on the actual babies, so they're not repeatedly washed or exposed to sunlight, which will retard the yellowing process, but not stop it, entirely."

There's also the tricky case of breast milk, which is an insidious thing. You think you've washed it completely clean from the tiny tee shirts and bibs, but when you pull them out three years later? Apparently not. I know that I have several shirts that had to go in the bin when I just couldn't stand looking like a reverse Regina George all the time. According to Charles, the lipids (fats) in the milk act as grease stains — which are particularly given to yellowing and difficult to get out — and then there's the small amount of protein in the milk, which is what actually causes the fabric to change color.

So, what can you do other than throwing out all of the discolored clothing?

My MawMaw had a trick for that, and Allen agrees with it. Growing up poor in the south, my grandmother had to learn how to make things last, and that woman was very proud of how she kept her and her children's clothes. She had a dozen tricks for any stain, but this one became very useful to me when I got pregnant for the second time.

Assuming you've already re-washed all the clothing, and tried OxyClean or whatever powerful soap you prefer, and it hasn't worked, there is a pretty good, all-natural way to bring those onesies from vaguely yellow to nice and bright.

First, you need to wash the clothes in scalding water — the hottest setting you have. Add a cup of lemon juice to the water after the washer has filled, (bottled lemon juice is fine), and a few tablespoons of rock salt. After they've gone through the wash, rinse them again on hot with a cup of white vinegar added to the rinse water. After that, hang them outside in the bright sunlight to dry for several hours.

Allen says that the salt and vinegar help disperse any grease from body oils that may linger in the fabric, and that the acidic lemon juice helps counteract the damaging qualities of the chlorine with its citric acid. As for the hot water, it does a better job opening the fibers of the clothing than cold water, and the sunlight is a natural bleaching agent that doesn't leave a residue and fades any residue left on the clothing.

This is one of those cases where the simplest remedy is the most effective, but if you find that you've done this and your baby onesies are still yellowed and faded, remember, they sell them in packs of 10 for a very good reason. Also, you could always tie dye them? That way, no one will know if you're crap at laundry or if your baby had raspberries for lunch, because it will all blend in. That's a win/win, if you ask me.

More Like This
Why Babies Love Water, According To Experts
The Best Toys For 3-Month-Olds
How To Breastfeed A Baby With A Cleft Lip Or Cleft Palate
Can You Get The Covid Vaccine For Kids Under 5 At CVS?