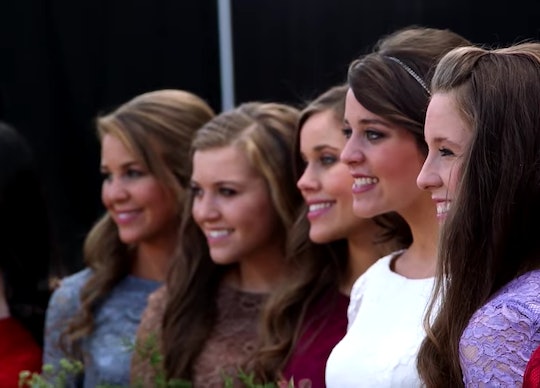 Why Do The Duggars Have Long Hair? It All Boils Down To Religion

Ever since we first got a glimpse into the Duggars' extremely conservative lifestyle back in 2004, viewers have been curious about the origins of their strict family rules. Wait, why aren't they allowed to dance? And what's with all of this side-hugging business? Are they really not allowed to wear pants — like ever? And why do all of their 11 "J"-named daughters (plus Michelle) have literally the same, exact hairstyle? As with many rules in their lives, the question of "Why do the Duggars have long hair?" all boils down to religion.

Look at almost any photo of the Duggars, and you'll notice right away that all of the girls have long, wavy hair. That's because Duggars tend to derive many of their other family rules from literal passages in Bible. Take the rule on girls wearing their hair long, for example. "Our hairstyle is our choice and we choose longer hair based on our understanding of 1 Corinthians 11:14-15," the older sisters wrote in their book, Growing Up Duggar, according to E! News. According to Bible Hub, the verses to which they are referring read, "Does not even nature itself teach you that if a man has long hair, it is a dishonor to him, but if a woman has long hair, it is a glory to her? For her hair is given to her for a covering."

As for the reason why the Duggar girls seem to prefer curly hair, that also goes back to religion. The writer in this Salon piece was raised in the Advanced Training Institute (ATI,) the same fundamentalist Christian organization with which the Duggars are affiliated. (This Christian homeschool organization hosts seminars worldwide and provides a homeschooling curriculum, among other things, according to the publication.) Ever since the Duggars appeared in their first TLC special 14 Children and Pregnant Again, they've essentially been promoted the teachings of ATI — which is sometimes referred to as "Gothardism," after the organization's founder, Bill Gothard. (Fun fact: Gothard stepped down as head of ATI after allegations of sexual misconduct with young girls came to light, reports The Washington Post.) So instilling a dress code for women, forbidding birth control for women, instilling a gendered labor division, requiring homeschooling, etc., all stems from ATI.

"ATI’s teachings trickle down into every single part of its members’ lives," Brooke Arnold, the Salon writer, explained. "This is not just a homeschool curriculum, it is a fully institutionalized religious sect with incredibly strict demands to conformity — rules that, in my experience, more often reflect Gothard’s personal preferences than actual Biblical teachings." Arnold continued:

Have you ever wondered why every Duggar woman perms her hair? It’s because Gothard taught us that curly hair brings out a woman’s natural beauty.

Aside from the ATI teachings and taking certain Bible verses literally, Michelle Duggar has explained that she styles her hair in a way that pleases her husband, Jim Bob, according to Cosmopolitan. "I know Jim Bob likes [my hair] long and I am trying to impress him — what he likes is what I want," she told People back in 2012. You can tell that Michelle was trying her hardest to be nice after she underwent a salon makeover for an episode of 19 Kids and Counting in 2013. The Duggar family matriarch had a decent amount of hair cut off and had her tresses straightened for her new look, and it's pretty clear she wasn't digging in. At all.

I think Michelle looked great after her makeover — but obviously, I did not "grow up Duggar." And to be completely honest, I didn't even grow up in a religious environment. That's probably why I can't wrap my head around the idea that how a person wears their hair has anything to do with how they will be judged before their god. I can't even agree to the concept of a woman wearing her hair a certain way only because her husband likes it. A few months ago, when I decided to dye my hair purple, the lady at the salon asked, "So does your husband like it when you color your hair crazy colors?" I laughed and said, "Even if he didn't, I would do it anyway." Because it's true! It's my hair; it's my say.

As much as the Duggar girls like to claim it's their "personal preference," it's clear that having long, curly hair is equivalent to honoring their god's wishes was instilled in them from birth. And hey, whatever. I would say, "It's only hair," but the blatant sexism of their religion makes it about way, way more.