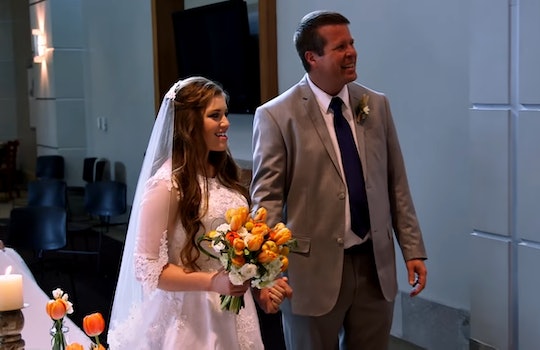 The Duggar family of TLC's Counting On, formerly of 19 Kids and Counting, are pretty unique, to say the least. Apart from the boatload of babies, the family is deeply religious and ultra conservative, which means they handle a lot of things differently than most viewers are used to. But while the modest clothing might be easy enough for most people to grasp, they have a few traditions that are a bit more puzzling. Like, why do the Duggars run down the aisle after getting married? It turns out that for them, a wedding is one big, long, comedy routine.

The average family puts on one, two, or maybe four weddings, tops. But when you have 19 kids (and counting!) in your family, you're throwing a wedding once or twice a year, so naturally, things can get kind of stale. Oh, look, a flower girl. First dance, sweet speech, dry chicken, yada yada. So the Duggars have a few wedding traditions they've added to keep their guests entertained. Obviously, they're not about to make somebody put a garter on a complete stranger's thigh for the sake of a laugh, so they've had to put a uniquely Duggar spin on their awkward marital sex jokes.

The Duggars, unsurprisingly, aren't allowed to have sex before marriage, but that's not where parents Jim Bob and Michelle draw the line. Their kids aren't allowed to kiss, hug (except from the side) or even go out on a date unchaperoned, according to In Touch Weekly. So the moment they're married is literally the first time they can touch their spouse, or be alone together. While your average couple waits until after the reception to consummate their union (officially, that is), the Duggars literally don't even know if they person they've pledged the rest of their lives to has bad breath, or kisses with their eyes open. Can you blame them for being a little impatient to get down to business?

When Jessa and Ben Seewald got married in 2014, they wisely chose not to have their first kiss of their lives in front of an entire megachurch full of spectators, and took off running as soon as they made it official. Their pastor even got in on the joke, according to In Touch. "It was their desire that they would share this unique and precious time alone, intimately alone," Pastor Mike Schadt told the crowd. "I guarantee you — and I know where they're at, but I ain't gonna tell you — I can tell you right now they're smooching. So the bottom line, the longer I talk, the more they can smooch in private! So if I could just have your attention for about three hours… The first kiss is a long one in private, you know what I’m saying?" Creepy or cute? You decide.

The family is into making spectacles at each other's weddings, as well. At Jill and Derick Dillard's 2014 wedding, Josh Duggar made a show of "stealing" his wife, Anna, a bridesmaid, from her escort on the way out of the church, according to The Hollywood Gossip, and Derick pulled the same move when Jinger Duggar married Jeremy Vuolo two years later. Josh was just paying it forward, apparently, because at his 2008 wedding, brother John David "forgot" the wedding rings and ran off of the stage to retrieve them, according to People. Brother Josiah one-upped that prank at Joseph and Kendra's wedding earlier this year, when the rings he "forgot" were delivered by a man rappelling from the ceiling, according to OK magazine. Say what you will about the Duggars, but their weddings are one hell of a show.

More Like This
Snooki Hints That A Sunday Dinner With All The Jersey Shore Kids Is In The Works
Khloé Kardashian Reveals Tristan Thompson Proposed To Her Last Year & Why She Said No
Kim Kardashian Stars In Hilarious House Of The Dragon Parody, The Targashians
Lifelong Teacher Dr. Jill Biden Loves Watching Abbott Elementary Too