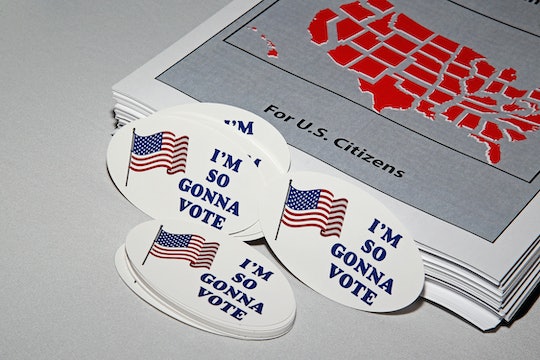 Midterm Elections Are Coming Up Soon — Here's Why Your Votes Matter

Voter turnout for midterm elections has always been conspicuously low, but this year, it's especially important to remember why exactly the midterm elections matter so much. Though the nation is not voting for the next President of the United States, there's a lot that could be decided with this upcoming November election and with issues such as health care, immigration, and women's health riding on them, every vote counts.

Governors also serve four-year terms of office and 36 states have their governor races set to land during the midterm cycle, according to the BBC. That means more than half of those who lead the charge on statewide issues can also change during an off-cycle. When a governor is elected, all state officials who serve under them are also elected, so important offices like attorney general and secretary of state are also up for grabs, as The Independent reported. Alongside that are local and state offices, like judges and sheriffs.

Specific to the 2018 midterms — and at a level seemingly unprecedented in recent memory — is the question of who is going to control Congress. While Democrats can’t regain control of the presidency this election, they do have a chance to flip the House or Senate, which would have far-reaching consequences, according to Vox. If Democrats are successful, as Vox explained "...the conservative legislative agenda would be dead."

Most Americans already know that flipping one of the chambers of Congress would put a roadblock in front of Republicans in terms of trying to pass new legislation. There already is somewhat of a hindrance thanks to the Senate filibuster rule, which requires 60 votes to pass legislation, according to Vox. Since only 52 Senate seats are currently Republican, they already had to win over some Democrats to push bills through, or use the budget reconciliation process. (I won’t go into those weeds here, but the National Conference of State Legislatures has a good explanation of how that process works.)

But even more importantly, if Democrats are able to win control of Congress, they will gain subpoena power, according to The Washington Post. That means they could push harder on and farther into a broad scope of investigations they’d like to open on the Trump administration. As the process stands, House and Senate committees can subpoena people and documents they’d like to review. But those committees are controlled by the party in power, according to Vox. Understandably, either party could be less motivated to lean hard on an investigation into its own administration.

Also, if either the House or Senate are flipped, it would greatly hinder President Trump’s ability to get nominees approved through Congress, and that doesn’t just mean Supreme Court Justices. Of course, the recent allegations against Supreme Court nominee Brett Kavanaugh — which he has denied, according to the New York Post — are weighing heavily as the midterm elections approach. With the Republican response milquetoast at best, dismissive at worst, "It just feels like it’s more fuel for the [Democratic] fire,” Democratic pollster Anna Greenberg told The Atlantic.

With women galvanized by the allegations of sexual assault and the response to them, it could very well result in a wave of women being voted in this election season, according the The New Yorker. In fact, the Rutgers Center for Women and Politics reported that Democrats have 183 women running in House races this year, according to The Atlantic. That compares to just 52 women running for the House on the Republican ticket.

Regardless of where one falls on the political spectrum, the right to vote has been hard fought and won for all of us. Though it’s sometimes tough to make time in the day to get over to the polling place, the ability to request an absentee ballot or mail-in ballot has made voting more convenient than ever before. Vote.org has a simple way to check if you’re registered to vote and links to each state if you want to check with or register at your state office. USA.gov can also direct you too your state’s election office.

And while most of us probably think we have a pretty good idea where we fall on the political spectrum, for a handy — or just fun — check on where you rank take this political affiliation quiz at ISideWith.com. It can drill down deep into issues to help you determine what you really think.

It feels like the issues at stake this fall are more important than ever; immigration reform, gun legislation, women's reproductive rights, health care, and wages are just a few of the things that will be argued in Congress in the near future, as Vox noted. And the people voted in will make or break the decisions.

With all this said, get out there and vote on Nov. 6.