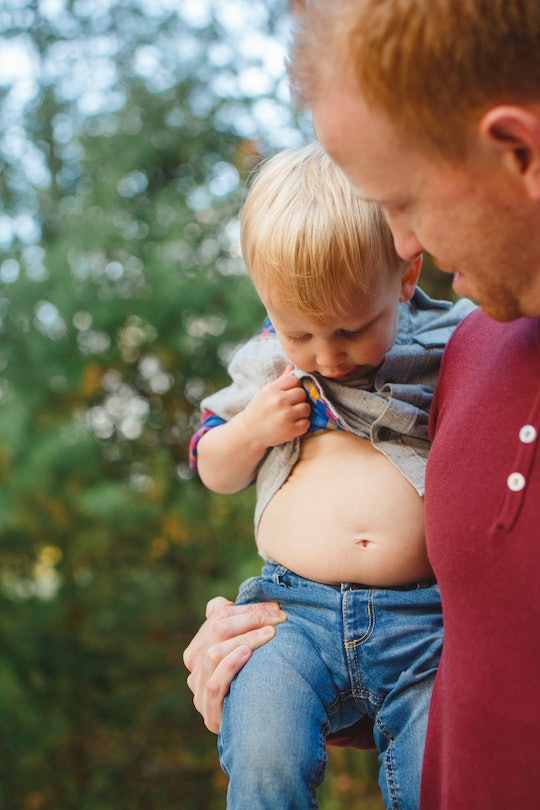 As babies grow into tots, their little tummies become more and more pronounced. They're so cute and nearly impossible to resist blowing raspberries on, but why do toddler abdomens stick out so much? You can thank their lack of core muscles.

The first couple years of life are full of dramatic physical development for babies. As pediatrician Amy Liu M.D. tells Romper, the position of a baby's stomach changes along with their posture, "from one that is sitting/crawling to one that is standing." Once they're upright, they'll begin to develop core strength, but at first, the "lower tone in their abdominal muscles... make the protuberant belly more obvious," says Dr. Liu. "Most toddlers' abdominal muscles don’t have enough strength to keep the contents of their abdomen close to [their] midline," pediatrician Whitney Casares M.D. tells Romper, which means that if your little one has a lot of gas or stool in their system, their tummy could look especially round.

Seeing your toddler's belly protrude even more after a meal may seem like a red flag, but don't cut out any food without speaking to your physician (unless there are allergy/anaphylaxis symptoms present). Dr. Liu says she "typically [does] not restrict foods in children unless there is a medical need, explaining that "certain foods may cause more bloating/gas, but they also have nutrients that are important as well." (Think high-fiber foods like whole wheat, oat bran, broccoli, beans, and lentils.)

Even though little potbellies are totally normal, there are some things parents should be on the lookout for. Seek medical advice if your child's abdomen is hard or if your toddler is constipated and their belly "doesn't look smaller after a bowel movement," says Dr. Casares. Additionally, Dr. Liu recommends parents call their pediatrician if the protruding belly "is associated with fever, vomiting, diarrhea, stomach pain, or changes in the bowel patterns."

Thankfully, for the most part, there's nothing to worry about with those little pot bellies. "As they get to school age, they become leaner with more muscle tone and the potbelly cuteness starts to disappear," says Dr. Liu. So, enjoy blowing raspberries on your toddler's tummy while you can, because, sadly, those days are numbered.

Amy Liu, M.D., M.P.H., Assistant Professor in the Department of General Pediatrics and Adolescent Medicine at the University of North Carolina School of Medicine

More Like This
6 Mindfulness Activities For Kids
What Age Do Kids Start School? Here’s What You Need To Know
12 Helpful Tips For Hiking With Kids
15 Adorable CoComelon-Themed Costumes You Can Buy Or DIY