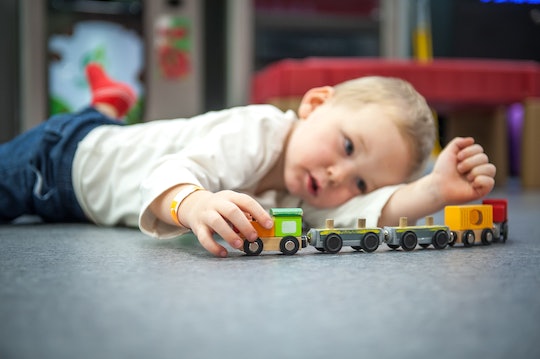 Choo Choo, Here's Why Your Kid Absolutely Loses Their Mind At The Sight Of A Train

When my son was about 10 months old, we bought him his very first Fisher Price train set. It was clunky and rubbery and colored so brightly that it almost hurt to look at it for too long. Obviously, it quickly became his favorite toy. He'd crawl along the floor, pulling the long string of locomotives across our dining room, annoying our dogs while happily entertaining himself. In short, it was a glorious thing. It was soon his favorite fixation, and I learned it was the same for tons of other tots. But why are toddlers obsessed with trains? Because honestly, they're not that exciting to me.

More Like This
The 7 Best Water Tables For Your Little Ones
The Best Splash Pads For This Summer
Vaccinated People Can Ditch Masks. Where Does That Leave Kids?
18 Best Sand Toys In 2021 For Babies, Toddlers, & Kids

There is fascinating, dynamic research being done in the field of toddler play and childhood learning. There is one study in the field of psychotherapy that suggested that it is the motion and speed of trains that makes them so fascinating. That the way they move on the track makes it appear like a television or a projector, but that the reality of it sparks some deep excitement in the child's brain. Think about it — as it rolls past, it looks like the flickering you'd see if you were watching a film played on a projector slowed down just a bit, and yet, it's completely in your environment, three dimensional and full of sound.

My son was more than just transfixed by trains, it was pretty much an obsession. Thankfully we live in New York City, a place where trains are in no short supply. One of his favorite things to do when he was a toddler was to visit the Transit Museum outpost at Grand Central Terminal and stare at the model trains as they whirred by on their tracks. Bonus points if one of the trains corresponded with a line we lived on.

Judy DeLoache, a professor of psychology at the University of Virginia, said in Live Science that this sort of intense interest is "perfectly normal. There isn't anything weird about it."

She also said that if you have heard that children who are autistic are particularly obsessed with trains, you shouldn't jump to conclusions. This would be only one of many other symptoms, and if your child isn't exhibiting any other symptom — like a lack of eye contact or other repetitive behaviors — you probably should not worry.

There's really no discouraging it, so it's best to embrace your toddler's train obsession as a part of their learning process, which is exactly what researchers say it is, according to the BBC. The act of observing things rolling, whether on a track or on a road in the case of cars (another toddler obsession), has been shown to improve spatial awareness and can eventually lead to better outcomes in STEM learning, the report found.

Why are toddlers obsessed with trains on television shows like Thomas The Tank Engine? It seems so disparate from the ideas that science puts forward. As it turns out, not only does it play into their love of the locomotive, but the addition of the beloved characters makes it almost magical. Scientists studying cross-cultural communication found that the friendships that occur between the trains help to elevate the emotional intelligence of the viewer by showing them a safe representation of this type of kinship absent from any societal or cultural imperatives. To these children, trains are just trains, even if they have a face, which allows them to be used as the perfect tool for learning interactions.

Admittedly, my children are well beyond their toddler years, but still, they cling to that love as though it were a security blanket. Their eyes light up at the prospect of taking the train somewhere, as opposed to walking or driving. And every time I see their eyes alight at the approaching N train, I get a little wistful for the days filled with multicolored "choo choos" scattered across our hardwoods.