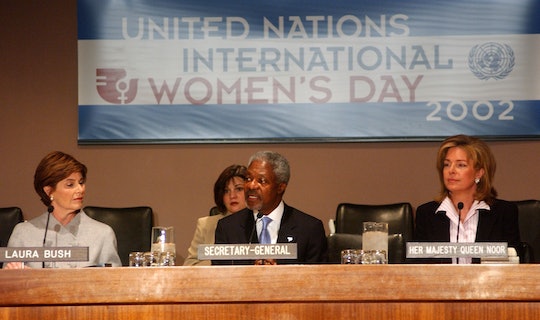 In the United States, March is Women's History Month. Each year, individuals, organizations, and various levels of government set aside time to celebrate and commemorate women's historical achievements and contributions. And on March 8, women around the world come together for International Women's Day — a day devoted to celebrating women's achievements, working to further champion women, addressing issues of inequality and disenfranchisement that continue to plague women in communities around the world. But why do we celebrate International Women's Day in the first place?

Although it may seem that a day that explicitly asks people to recognize the contributions of women as well as advocate for the change that's still needed is outdated or unnecessary, it's not. According to the institute For Women'sPolicy Research, women still make less than men for the same work. Additionally, the World Economic Forum's Global Gender Gap Report 2016, predicted that the gender gap in North America won't close for 158 years, if progress remains the same as it is currently, for example. The success of a movie like Hidden Figures, which shines a light on the work contributed by three African-American, female NASA mathematicians who were essential to successfully launching a man into space, and whose stories many had never heard just further underscores the continued necessity for a day such as this one.

Women (and men) in the United States are still fighting for paid parental leave after giving birth or adopting a child. This year, the UN is using International Women's Day commemorations as a way to accelerate the momentum in accomplishing the goals of its 2030 Agenda, which focuses on sustainable development. It hopes to specifically focus on two of the enumerated goals, one which focuses on gender equality and one which focuses on closing the education gap. Both of these issues continue to be major issues, not just in the United States, but all around the world.

Basically, there's a whole lot of work still left to be done. But celebrating International Women's Day serves as both as a reminder of how powerful women are and a reminder of how far we still have left to go.

More Like This
The President Of Ireland Wants To Get Rid Of Homework & Honestly, He's Onto Something
Harrison Ford Is A Proud Dad Of 5 Kids Who Are More Than 30 Years Apart
Adele’s Grammy-Nominated Album Features A Beautiful Song Written For Her Son Angelo
Brandi Carlile Is “Finally Cool” To Her Two Adorable Daughters
What Parents Are Talking About — Delivered Straight To Your Inbox